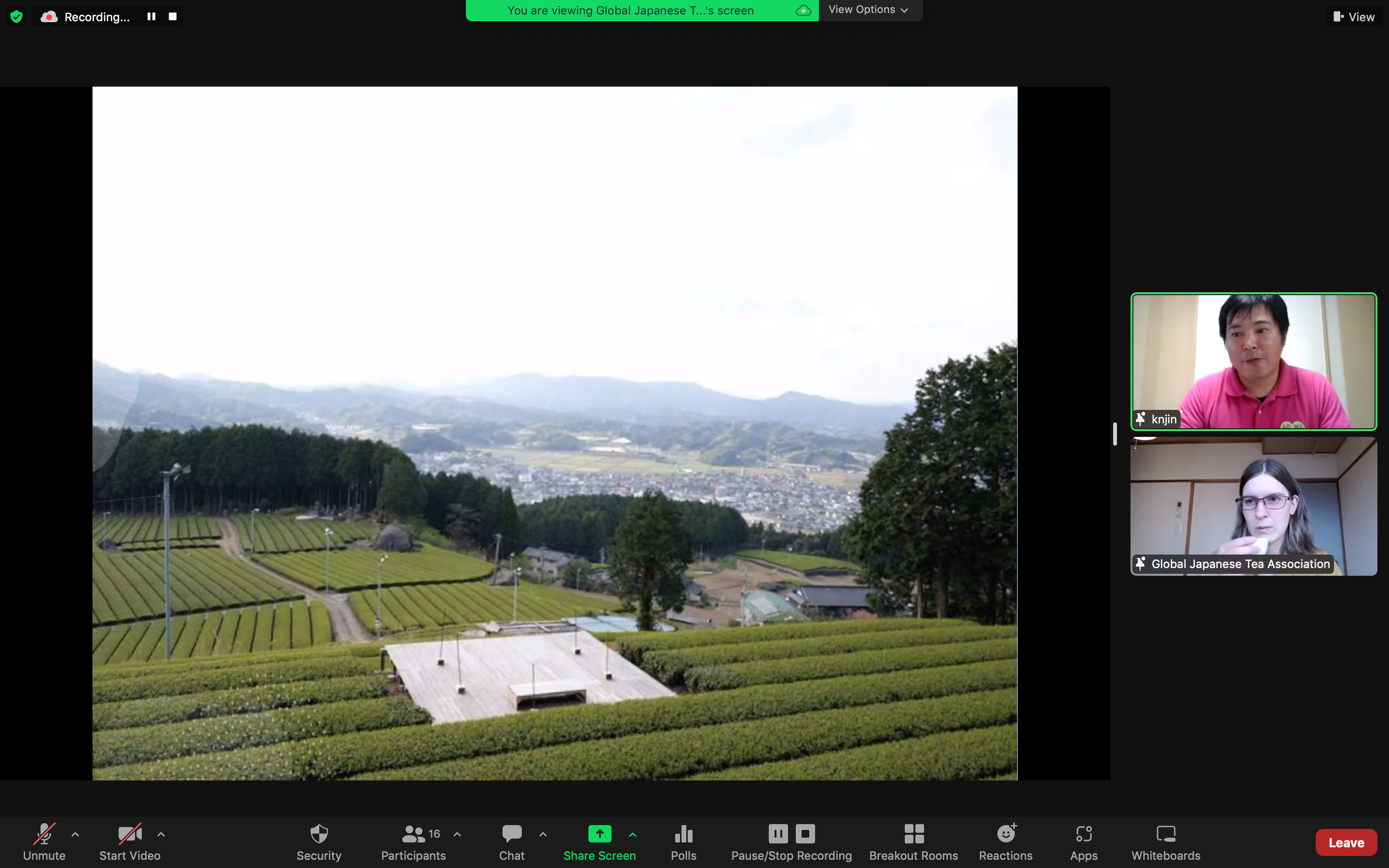 On 20th July we had the pleasure of hosting Kenji Inoue for our “Meet the Tea Farmer” webcast series!

Inoue-san is  the 4th generation tea farmer and the president of Inoue Seichaen – a tea farm in the Ureshino region of Saga Prefecture. He is also a member of Ureshino Chadoki – a group of young tea producers that are introducing Ureshino tea in a more modern and cool way. Inoue-san went to Shizuoka to study tea and after completing the program he went back to Saga and took over the tea farm from his uncle. Now he manages about 3ha of tea fields and mainly produces tamaryokucha and kamairicha, but also a bit of hojicha and wakoucha. Inoue-san also likes to flavour his tea with other local plants like mint and yuzu.

On the day of the event, we tasted together two of Inoue san’s teas: a sweet Tamaryokucha from Tsuyu Hikari cultivar, and a refreshing blend of Tamaryokucha and a Japanese citrus yuzu.

We started from a steamed tamaryokucha of single Tsuyu Hikari cultivar. This cultivar can be found all over Japan but not usually in tamaryokucha: today’s tea is quite special. Inoue-san recommended to use about 3 to 5 grams of tea for 150 to 200 ml of water and brew it at 70ºC for 1 minute. He suggested not to move the teapot while the tea is steeping. Once the tea is ready, to serve it in the cups a little bit at a time, in four little pours. Inoue-san used a unique teapot: a lidless kyusu that is called “futanashi”; his particular tea-ware, beautiful and white, was created by Ureshino Chadoki and crafted locally. A futanashi kyusu makes it easier to steep the tea because you can look at the tea leaves. There is a lot of space: the leaves are dancing freely in the water!

This tea was very vivid in colour! While we tasted it, Inoue-san was explaining a bit more about Tsuyu Hikari: it is quite strong against pests, therefore there is no need of using lots of chemicals. It was bred in Shizuoka and recently it has become really popular. But there is not much available and Shizuoka has become a little protective with it: they do not sell it outside of the prefecture anymore. Inoue-san is lucky to have it and we are even more lucky to taste this tea! This tamaryokucha  was harvested on 3rd of May after being shaded for around 10 days. The steaming part of the process was light: “asamushi”. Inoue-san prefers light steaming with this cultivar because this tea is quite easy to steam. Nevertheless,  this cultivar is usually found around Japan as fukamushi – deep steamed tea. The participants enjoyed this tea very much ! They thought it had an elegant taste and aroma, that was very fresh and umami. It even reminded of buckwheat. For the second brew, Inoue-san suggested to use hot water, so it is easier to extract the components and have a richer brew. He actually said: “If you are gentle with the first brew, then you can have a second and third nice brews”. He also mentioned that this tea also works well in a cold brew and suggested a “Koridashi” method – ice-brew.

The second tea was a blend of Tamaryokucha with Yuzu (a Japanese citrus). Inoue-san went to collect, peel and dried the yuzu himself. This is a natural blend with only pure dried yuzu peel. For the tamaryokucha, he used a mix of Tsuyu Hikari and Yabukita cultivars. The reason he chose those two was to make a tea that would not be overcome by the yuzu flavour and aroma, but instead complemented well.

Inoue-san recommended to use 5g of tea with around 150ml of water. He suggested to cool down the water to 65ºC to avoid the bitterness from the yuzu to be too powerful; and to steep the tea for 90 seconds. The tea liquid surprised us again with a very beautiful vivid colour! All the participants liked it a lot. They found this tea to have a very good balance between the yuzu and the umami of the tea. This tea would work very well in cold brew as well, extracting perfectly the freshness of the citrus and the umami of the tamaryokucha.

Inoue-san is planning to make some yuzu hojicha next!

In between the tastings we talked about different things: we explored a little bit about Saga tea and Inoue Seichaen. There were many questions from the participants. We talked about the difference between tamaryokucha and kamairicha, about tea-ware, differences in light and deep steaming and much more!

ありがとうございました Arigatō gozaimashita, Inoue-san! We are looking forward to tasting more of your teas!