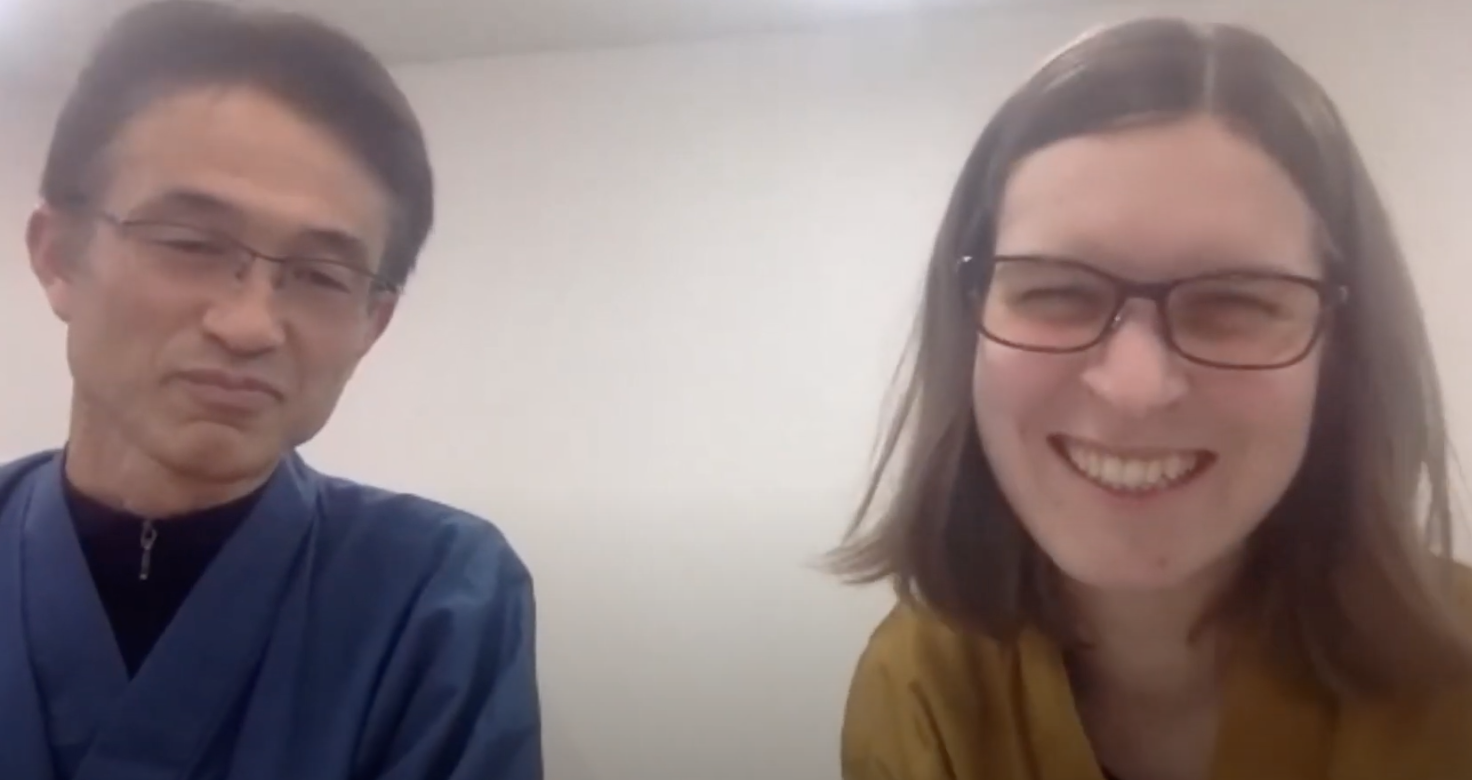 Last 27th of January we had one more Meet the Tea Farmer event. This time we met Yoshihiro Sugimoto, a third generation tea farmer from Wazuka, Kyoto; a good crew of our members joined from all over the world (Italy, Portugal, The Netherlands, Belgium, Australia and USA!)

Sugimoto-san cultivates and produces sencha, matcha and wakoucha but he especially likes wakoucha: he fell in love with it and started producing it 10 years ago. Now he makes several kinds of Japanese black tea. He even makes a kind of wakoucha blended with dried flowers, which is not usual in Japan!

We started the event tasting a wakoucha that is a blend of Yabukita cultivar with Zairai. For this tea, Sugimoto-san surprisingly used a glass pitcher and a strainer instead of a teapot: he said that finds it easier for everyday use, while a kyusu is easier to break (especially the lid) if you use it so often. Also the cups he used were a bit unusual for Japanese tea: a bit bigger and in a sort of flower shape, that helps to smell easily the aroma of the tea. The participants found this tea smooth, light and to be quite sweet naturally even brewed with boiling water and Sugimoto san said that his intention for first flush 2021 is to make this tea focusing even more on its aroma. We will be looking forward to try it! Sugimoto-san showed us photos of the processing of this tea, the factory and the machines used; he explained us that the whole process lasts 22 hours – 18 of which are used for withering!

The second tea we tried has been called by the farmer “Wazucha”: this was actually the first time he produced it. This tea is a steamed tamaryokucha – usually produced in the south of Japan, it is not so common in Kyoto prefecture! Sugimoto-san explained that tamaryokucha is a kind of curly tea that originally came from China and its process has historically been using a pan frying method. Nevertheless nowadays another kind of tamaryokucha exists, that is steamed like a sencha but does not go through the needle-shaping process. To brew this tea Sugimoto-san used a kyusu (Japanese teapot) and high temperature: he explained that hotter temperatures help to experience the aroma of the tea better and allow people to enjoy astringency and sweetness altogether. This tea is quite sweet and not very bitter, therefore can be enjoyed brewed this way. Actually Sugimoto-san’s opinion is that this tea can be very casual, suggesting that can be the tea drank after a meal in a mug: he thinks that despite mugs are not very Japanese, are quite handy and very practical, especially for drinking tea while working at the computer! After the tasting we could see photos during different seasons of the tea fields where Sugimoto-san cultivates his teas: he has 10 different cultivars all around!

During the event there were many interesting questions from the participants. One in particular went quite in depth on tea geekiness: how do you get less astringency in the making of the tea? Sugimoto-san answered that there are two factors playing a role. One is the cultivation: the application of fertilisers has direct effect on the final taste of the tea. The other is the processing: during the rolling phase of the tea process, the tea leaves get their juices and components out of their cell walls. If a tea is not rolled at all, like a white tea or a tencha, the flavour will be very light. Rolling the tea leaves help to get more umami and more astringency. While a more intense rolling removes more astringency because the catechins tends to stick to the machines: more catechins (one of the components where the bitter flavour comes from in tea) are left out of the tea leaves with a more persistent rolling.

What an interesting event, thank you Sugimoto-san for leading it! We will host just a few more Meet the Tea Farmer before taking a spring break to let tea farmers focus on first harvest: stay tuned and don’t miss the opportunity to join!