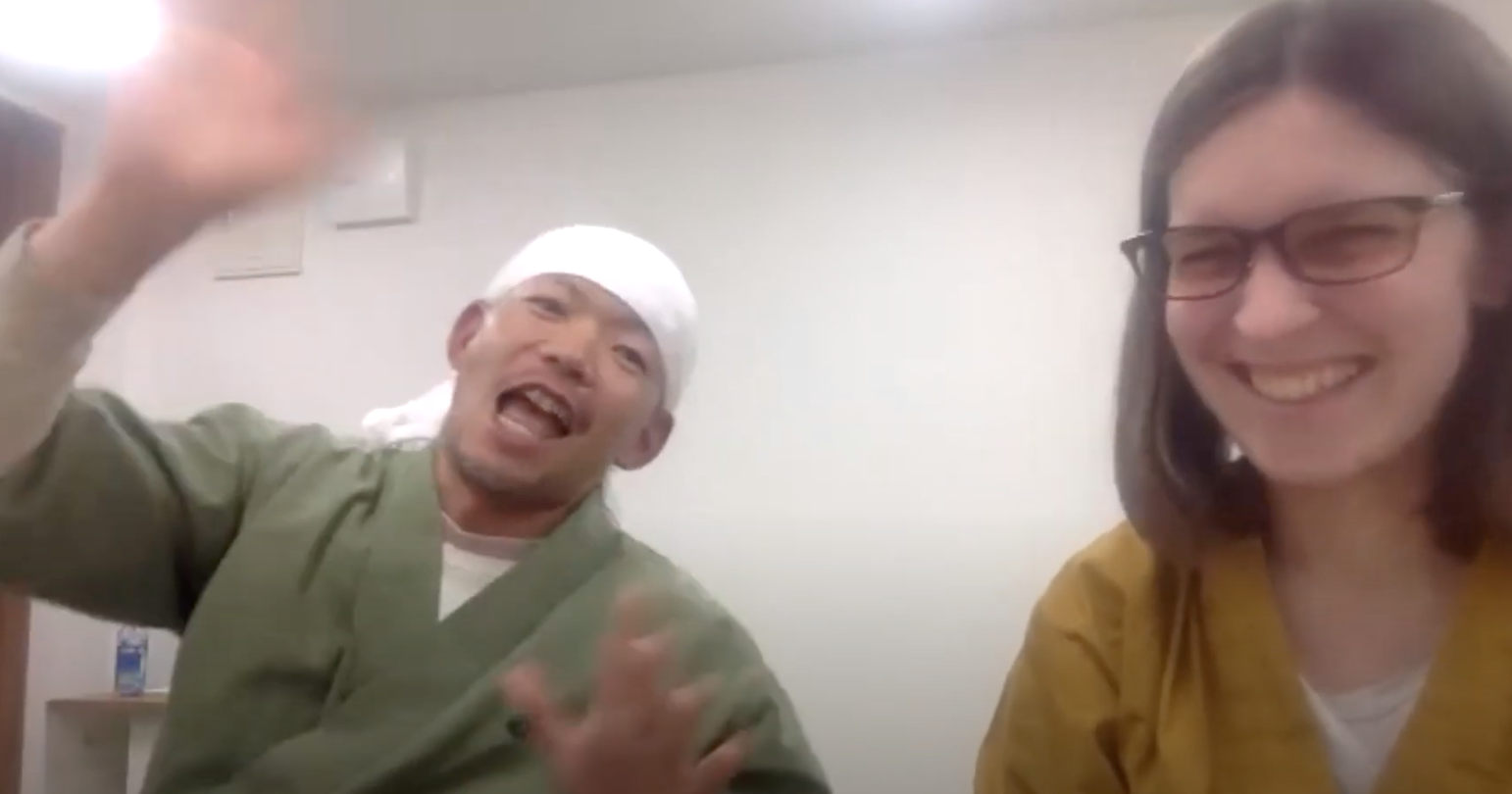 On the 24th of February we had one more “Meet the Tea Farmer” event: this time the guest tea farmer was Akihiro Kita, president of Kyoto Obubu Tea Farms. Tea friends joined from Belgium, Portugal, USA, Japan and Spain and we could try together a kabuse sencha and a very special hoji-wakoucha.

Akky-san fell in love with tea during his college years, when he went to work at a tea farm. He decided he wanted to be a tea farmer and to learn to make the tea that blew his mind. Many years passed since then but his passion for tea is always incredibly strong. Akky san’s energy is a contagious driving force: all the interns that experience tea first hand at Obubu, end up loving farming tea with him!

This Meet the Tea Farmer session started with watching a beautiful video on how kabuse is cultivated and shaded, then we tasted the teas together. Akky-san brewed the kabuse sencha using a houhin instead of a kyusu, to enjoy better the thick umami taste of this tea. He mentioned that he prefers to bring the water to boil, because “it feels more alive”, and only then cool it down pouring it from the houhin to the cups: this way allows the teaware to warm up while cooling down the exact amount of water needed before pouring it onto the tea leaves. Akky-san uses quite a bit of tea, around 6 or 7 grams for a small houhin, water at about 68º degrees for the first brew and measures the time without a watch: he looks at the tea leaves while “tea is dancing” in the teapot. When the leaves rise up to a same level as water, then he pours the tea. While going through this first brew, we chatted about different water types and qualities: the way tea changes its liquid colour according to water hardness or the fact that soft waters allow to feel the umami taste way better than hard ones.

Akky-san showed us photos of his tea fields, farming and factory. And “temomi” (hand rolling)! Did you know that one person can make 500/600 grams of tea in 5 /6 hours of handrolling while a machine can make 15 kilos in 4 hours? Akky san also told us that the proportion of umami and bitterness changes if the rolling process is made by hand, compared to machine.

The second tea we tried was a very peculiar one: hoji-wakoucha. This tea was made using bancha grade leaves for black tea processing; but at the end of it, the tea leaves were roasted as if it was a hojicha. Akky san suggested to brew this tea with boiling water and steep it in a kyusu until the leaves are fully open and the liquid has a reddish colour. The aroma of this tea was pleasantly intense, sweet and a little bit tangy, reminding dried grapes. The brew was quite delicate and not strong for a black tea. With this tea, we talked about tea pairings with food and some interesting ideas came out: one of the participants mentioned that second flush wakouchas are usually good with cheese and tomato foods (for example pizza!!!). What interesting things come out at each Meet the Tea Farmer sessions! Stay tuned for next one.