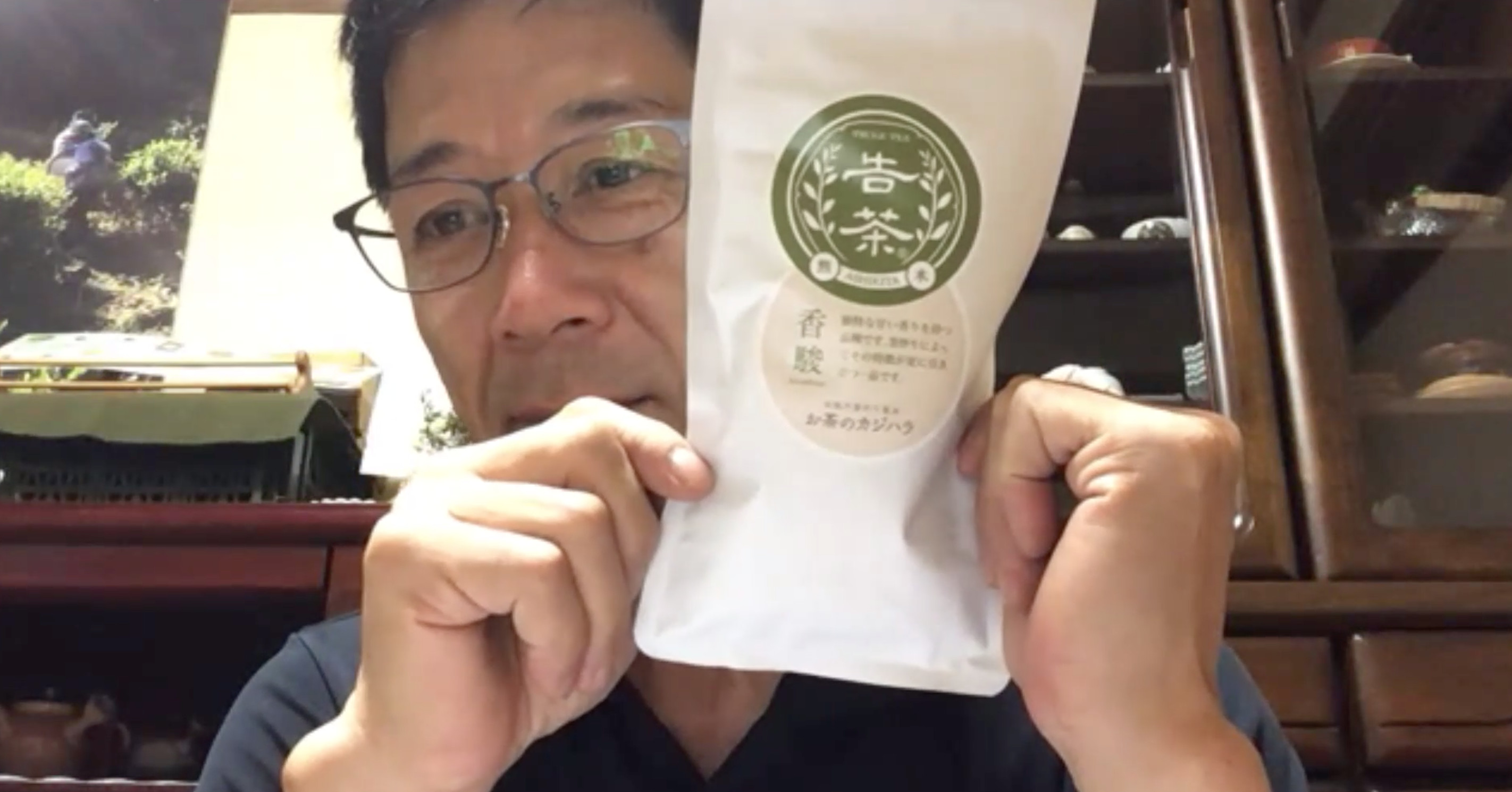 Our last Meet the Tea Farmer event for this season took place last 24th of August. This time the guest of honour was Toshihiro Kajihara – the 3rd generation tea farmer and the president of Kajihara Tea Garden – a small tea farm located in the Ashikita region of Kumamoto prefecture. Kajihara-san mainly produces pan-fired teas. He has even gone to China and Taiwan for further study pan-fired tea production. He makes various tea, in an organic way. Kamairicha but also wakoucha and oolongcha!Kajihara-san has been making tea for 40 years now and since the beginning he has been selling directly to the customers, never at tea market auctions. He mainly sells to locals around his area.

During the event, we tried together two of his teas: a refreshing Kamairicha from Koshun cultivar, and a unique Hojicha made by roasting Kamairicha.

The first one, a kamairicha from spring harvest, was made with tea leaves of a cultivar called Koshun – quite special! Some people describe this cultivar as milky, some others as smoky. But Kajihara-san thinks this cultivar has some herbal notes. The brewing suggestion was to use 3 grams of tea with 100 ml of water at 80-90ºC, and brew for 1 minute. Immediately we could see one of the features of kamairicha: the colour of the liquid is very clear and bright, quite different from sencha or other Japanese teas. The participants enjoyed this tea a lot, they found it very balanced and quite similar to Chinese teas! And there is a reason for that: Kajihara-san says he has travelled to China and Taiwan to learn about their tea making. He got inspired and learnt a lot, especially about the first step of making this tea, the oxidation stopping. It is very different to how it is done in Japan. He then changed what had been his way and thanks to what he learnt and applied, the taste became more clear and the aroma became stronger as well.

Kajihara san uses spring leaves to make green teas only (kamairicha) and later ones for other teas, like wakoucha. He also showed us his factory and some of the machines he uses. He has a rare one for firing (hire) that is small and old, so almost no one uses this kind of machine anymore. Sometimes he even puts a lid on so as not let the heat escape.

Among the tea fields of Kajihara-san, he also has some wild bushes, Yama-cha in Japanese (literally “mountain tea”). Those are quite hard to look after and you cannot harvest a high amount of tea from it. Moreover, machine harvest is not possible. Those plants are over 100 years old. Probably the bushes where already there when his father started working with tea, so he feels he cannot quit making tea from those ones, despite all the effort it takes. Those plants just naturally spread, are seed grown and have lots of strength. Kajihara-san also has lots of Zairai (seed grown plants). Because the slopes in this area are steep (even 30% steep!), replanting was hard, so he essentially kept Zairai plants for that reason. But nowadays Zairai is becoming popular, so he is glad he kept it all this time.

The second tea we tasted was a hojicha from first flush, using a blend of cultivars and zairai leaves. Kajihara-san used a Bankoyaki teaware to brew this tea and he suggested to use 3 grams of tea for 100 ml of water at 90-100ºC and steep it for about 30 or 40 seconds. The aroma of this tea is very smoky, due to the roasting. The old pan for firing is used in this case, so it might feel stronger. Nevertheless, the taste is very sweet. The participants founds it quite amazing. Kajihara-san said he personally likes to drink this tea in the evening or after meals because is refreshing. He also recommend it as cold brew.

The meeting ended with a message from our main guest: Kajihara san told us he is really grateful for this chance to meet all of you from around the world. He hopes there will be another chance to meet. Thank you very much.