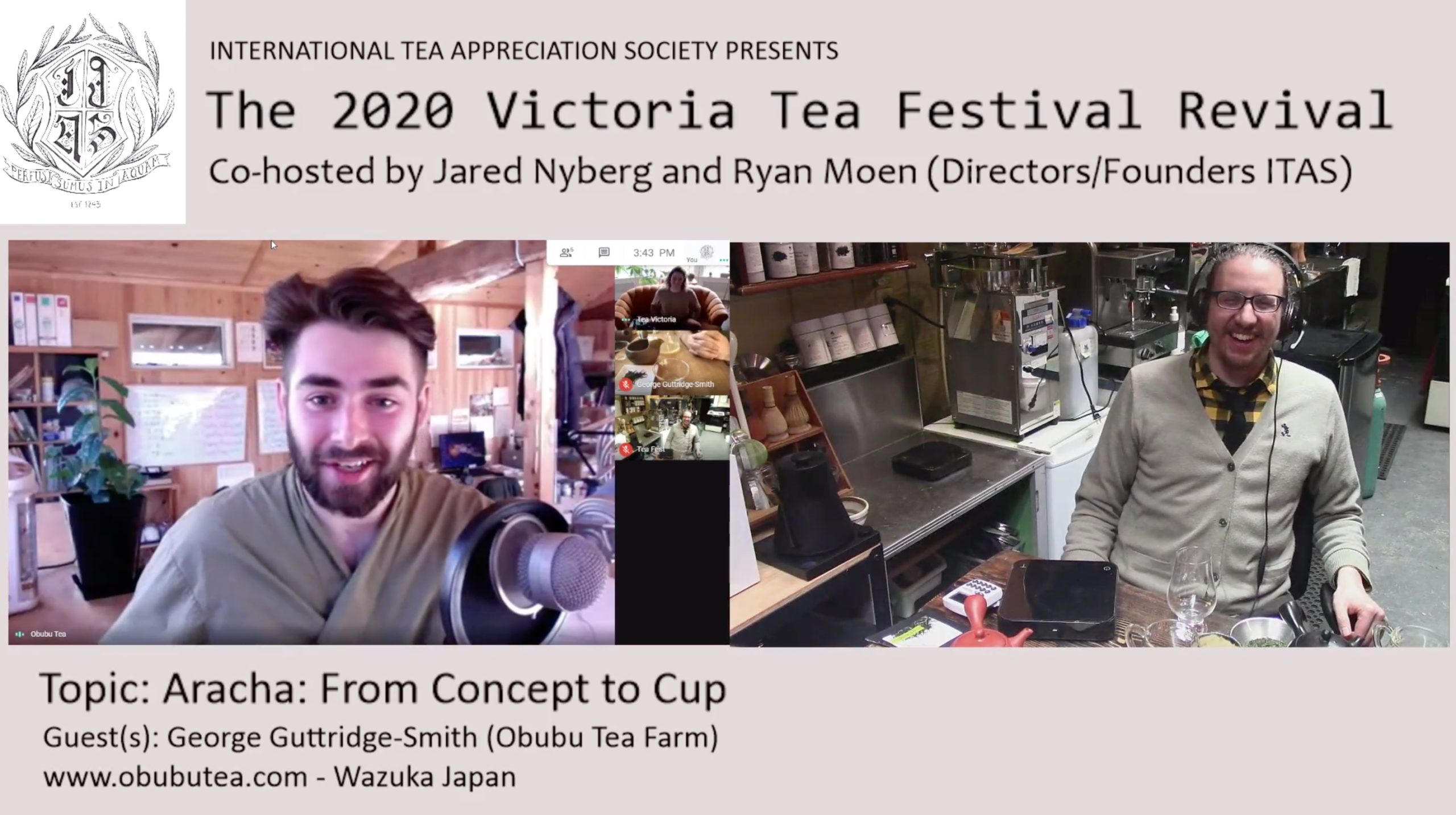 Organised by The International Tea Appreciation Society, on 23d and 24th of November the Victoria Tea Fest Revival 2020 took place online! An extended Tea Symposium program was streamed live for 24 hours (!!!), with many different guests from around the world. Many of the talks caught our attention, but among them of course we will focus on the ones related to Japanese tea.

“ARACHA: FROM CONCEPT TO CUP”. Our Tea Fellow and tea specialist George Guttridge-Smith, who works at Kyoto Obubu Tea Farms, talked about “Aracha”. After introducing Obubu, George explained what aracha is (i.e. farmers’ tea, the first finished product that is sold at auctions to wholesalers) and the difference with “Shiagecha” (that is, in contrast, processed by the wholesalers once the tea is bought: it is the finished product after aracha is sorted or blended or fired to adjust its flavour, colour or aroma). Together with the festival organizers, George brewed some sencha (Obubu only sells aracha, does not do shiagecha) also explaining the Japanese way of brewing tea using no lid on the teapot, looking at the leaves unfolding. George stressed that when the shiagecha is made right, it is amazing; but blending is often used to cover the weaknesses of the tea. “If you have a very delicious high quality sencha, why not drinking it on its own? Good quality tea is made in the field.” George’s message was to bring up the contrast between aracha and shiagecha, not that one is necessarily better than the other. But the concept that aracha is the way the farmer make the tea.

“ALTERNATIVE WAYS OF EXPRESSING TEA LEAVES”. Pedro Villalon, the owner of O5Tea bar in Vancouver, did a talk on how to revive some tea that has been left open for too long or is too old. He did a demonstration of roasting some sencha into hojicha using a traditional Japanese horoku. In fact, if a tea is not as good as it was in the day, roasting the leaves gives it a different twist and allows to appreciate it in a different way. Pedro also talked about “bukubukucha”, an Okinawa style tea with roasted rice, and together with the festival hosts also tried to brew some wakocha (a mix of benifuki and benihikari cultivars) with a pour over method using a Japanese stone filter.

“WAZUKA TEATOPIA FESTIVAL”. We were very happy to see some of the organizers of the annual tea festival of Wazuka participating at this international event! Tetsuya Imanishi (of Imanishi Seicha), Haruka and Chihiro did a presentation about Wazuka tea town, which is important despite being a small town because it produces 40% of all Kyoto tea. They explained that due to Wazuka soil and geography, its tea has a very characteristic aroma and flavour. After showing a video presentation of a whole tea process, from harvest to factory, a yabukita sencha harvested and produced in May 2020 by Tetsuya Imanishi was brewed. The Victoria Tea Fest organisers were surprised by the umami taste of the tea, despite not being a shaded one: Tetsuya says it is because of Wazuka landscape – fog in spring functions as natural sun block, that’s why a lot of umami/sweetness is preserved even in roji (non-shaded) sencha.

“SOIL STRUCTURE AND ITS IMPACT ON FINISHED TEA”. Kohei Takaki, tea farmer from Hoshinomura, Yame, Fukuoka talked about mineral components in the soil that make a huge difference in the actual flavour of the tea. He showed one of his fields where the cultivar is samidori, the one he has been fertilising on the day. He also explained about the problems that ammonia nitrogen introduced into the soil as fertiliser can cause to the nearby waters and, because of it, his choice of using a 100% organic fertiliser. For this, he says that canola oil pressing leftovers are ideal, but this year the prices went up like crazy, so he is experimenting with sesame seed husks leftover from sesame oil.

“GRANULAR GAUGES: MICRONS, MATCHA, AND THE RELATIONSHIP BETWEEN TEXTURE AND FLAVOUR”. Jared Nyberg, one of the festival organisers, talked about the relationship between texture and flavour in matcha. He actually has a grinding machine which he uses to grind the matcha (and measure the microns). He stressed also the importance of the mill that grinds the matcha, the importance of reaching a fine texture without heating the tea in the process and also the importance of matcha particles being round and not squared and the difference that makes while drinking it.

“CREATING MATCHA, HOJICHA AND GENMAICHA BEVERAGES”. Kimmy Xiao of Whisk Matcha tea bar in Vancouver, travelled around Japan and its tea regions. She fell in love with organic matcha and decided to encourage people to drink it and to know it better. In the talk for the festival, Kimmy showed how to prepare matcha, hojicha latte (from loose leaves) with oat milk and genmaicha latte.

“HOW TEA MIGHT CHANGE IN THE NEXT 20 YEARS”. Timothy D´Offay, of Postcard Teas in London, talked about two very interesting and important topics: the future of tea drinking and the ethical treatment of tea workers. During the talk, Timothy explained how in the past loose leaf tea was the majority while now tea bags is the common thing: sadly “people get scared by loose leaf tea, like the simplicity of tea bags and like no mess” so he thinks unfortunately tea bags are here to stay and that bottled tea will have a future also in western countries (he made the example of how bottled tea has become popular and normal in Japan). But he also thinks that maybe different ways of drinking tea like cold or ambient brew or tea distillates can have a future in restaurants and alcohol brands. The second topic – the payment conditions in the tea industry, is a sensitive one. Luckily, it is not really an issue in Japan, quite the opposite: Tim made notice that Japan is a role model for other countries: its “flatness society, the communal factor, the way small tea farmers often collaborate” sharing a tea factory for example, are all things to look at. He has noticed through years of experience in the tea world that small communal work usually goes hand in hand with better conditions. This is also the reason why Postcard Teas decided to work with small farms only: they feel that small farms have less cases of hard and underpaid labour and the buyer can contribute making a real difference. In such an important issue, of course we were happy to hear Japan being mentioned as a good example that could help other tea realities around the world.