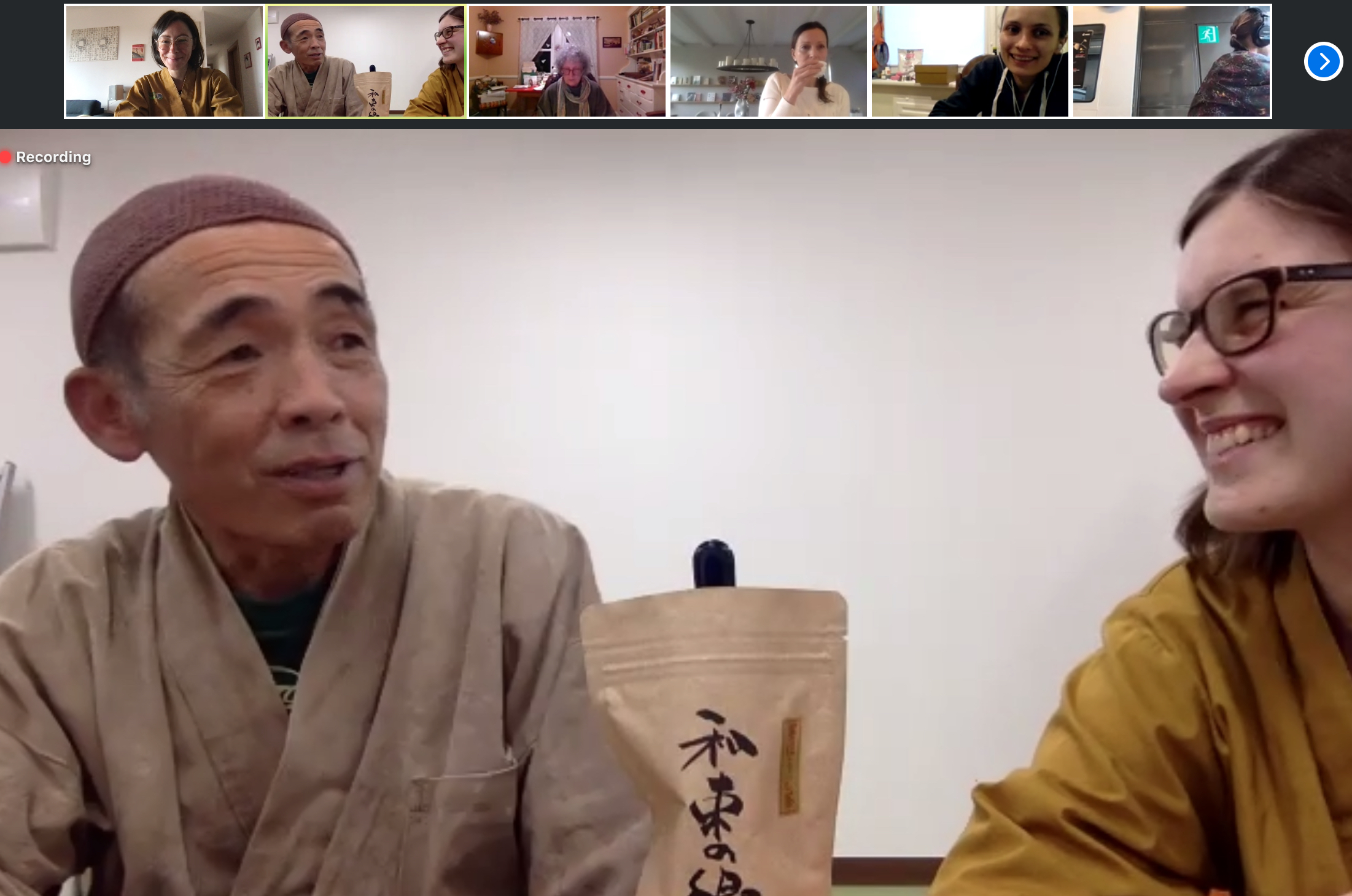 At our monthly Meet the Tea Farmer event on 25th November our guest tea farmer was Noriyasu Uejima – a 5th generation tea farmer from Wazuka, Kyoto.

Uejima-san decided to continue his dad’s activity as a tea farmer when he was 22 years old. Soon he realised it wasn’t an easy task and one that often does not offer a good income. Instead of selling at tea auction like his father always had, he started selling the teas directly to customers – he likes when he can see directly that people enjoy his teas. Traditionally, his family produced only sencha, but around 15 years ago they started also producing tencha, at a time when there was almost no matcha production in Wazuka. Now Uejima-san production consist of a 30% of sencha and 70% of tencha/matcha. During the event all together we tried one of his matchas and one of his hojichas.

Uejima san produces 4 kinds of matcha and the one we tried he calls it “kaze”, that in Japanese means “wind”. It is an usucha grade from Samidori cultivar: a cultival whose origin is in Kyoto and whose characteristic is its creaminess and almost fruity taste.

He showed us his way of preparing matcha: first ad only 1/3 of the water we are going to use to the matcha, and slowly mix it with the chasen – this helps to dissolve the clumps. Then, add the rest of the water (around 50 ml) at hot temperature and whisk for 10 to 15 seconds. The matcha was sweet and had no astringency at all! Paula, one of the participants, said that the name was actually a good one, cause she felt like a whirlwind in her mouth after drinking it!

The other tea we tried was a light roast kuki-hojicha, made from second flush sencha stems. Uejima san suggested to brew it at boiling water for 30 or 40 seconds to extract more aroma and more taste of the tea. This tea is actually served at the Ritz Carlton Kyoto afternoon tea!

While we sipped at the teas, the conversation went on different topics and questions from the people attending. How the drinking style has changed in Japan in recent years? Pet bottles have become the common way in the recent years while traditional kyusu teapots are disappearing from common households. Which is Uejima san’s favourite teapot? A houhin designed by himself (!!!). The difference between koicha and usucha. Why young people in Japan decide to give up on the family tea farming business? Tea farming being a hard job, the young generations often prefer doing something else; but there are also new people whose family had nothing to do with tea that want to start tea farming and Uejima san has been training some of them who arrived to Wazuka. And he also has been going to Vietnam for the past 5 years to teach tea production there.

With all those topics, an hour and a half went by very fast!

Our next Meet the Tea Farmer event will take place in January 2021 after a holiday break. We are happy to host these events and see how much the participants and the tea producers enjoy it!