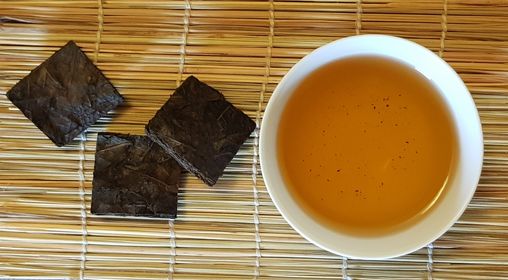 Just like China with its pu-erh, Japan has its post-fermented tea too. However, Japanese post-fermented teas are produced only in small quantities and are very geographically specific! Most of these teas are produced in small rural villages, where this very particular tradition is being kept alive by a few people, usually of the older generations. These teas are mostly unknown even to the Japanese people themselves.

Post-fermented tea in Japanese is called kōhakkōcha (後発酵茶), also known as kurocha/kokucha (黒茶) or black tea. Sometimes tea vocabulary can be a bit tricky and lead to confusion. For example, in this case, the term “black tea” is used according to the Chinese classification and refers to the post-fermented or “dark tea” (heicha in Chinese). The oxidized teas, which in the West are usually identified as black (like Assam, Darjeeling, etc.), in China and Japan are called “red teas” (kōcha, 紅茶) instead.

The fermentation process of post-fermented teas is very different and shouldn’t be confused with the enzymatic oxidation that takes place in the production of oolongs and black teas (called red in China or Japan). While oxidation involves the reaction between oxygen and the polyphenols contained inside the cells of the tea leaves, in post-fermented teas the fermentation occurs when microbes, like fungi (yeasts, molds) or bacteria, are introduced during the tea processing, digesting the leaf’s organic matter and creating the delicious and matured flavors of there teas.

Pu-erh tea leaves are picked by hand in spring, summer, and autumn, while in Japan post-fermented teas mainly come from summer harvest. To reduce the humidity, after picking the leaves for pu-erh are withered outside away from strong sunlight, or inside using hot air.  After withering, the leaves are softer and easier to process.

The next step in the process is the so-called “killing the green” or fixing (sassei in Japanese – 杀青), that prevents the leaves from oxidizing and becoming brown, thus preserving their green qualities and freshness. In pu-erh production it is carried out by heating the leaves in big iron woks, where as in Japanese post-fermented teas, it usually done by steaming or boiling the leaves. After this step, the leaves must be cooled quickly to avoid over-baking and be ready for the next processing step – shaping. Here, the leaves are rolled and twisted to push out extra moisture and release aromatic compounds.

Finally, the leaves are sun-dried over large bamboo baskets. If the weather is rainy, they may also be carefully dried over the fire. Nowadays these processes are mechanized, although the traditional methods may result in better quality.

The resulting dried, crude green tea leaves are the raw material (aracha in Japanese – 荒茶 or maocha in Chinese – 毛茶) for the following compressing and fermenting steps. The fermentation can occur naturally or be catalyzed and sped up by a process called piling. In the natural fermentation, the raw tea leaves are compressed in flat cakes or other shapes and then left to ferment naturally, possibly inside a storehouse in a long-term storage. This kind of aging literally takes ages! Moreover, an environment that is not subject to drastic changes in temperature and humidity over the seasons is also necessary to ensure that the tea ferments cleanly, evenly, and fully. Despite being a time-consuming process, natural aging gives tea a complex, aromatic nuance and a unique mellow taste.

The artificial fermentation, on the other hand, was developed to minimize the waiting time and obtain a product that can quickly satisfy the demand in the market. Piling is a process that, through careful control of humidity and temperature, enhances the microbial fermentation of the tea leaves. The raw leaves are piled, moisturized with water, and kept at a temperature of around 60° Celsius (140° Fahrenheit) for about 48 days. Thanks to this technique, the tea does not need long storage and the benefits of fermentation can be enjoyed immediately after buying. Once the tea is ready after piling, it is dried again in loose-leaf form and sorted into different grades. It can be sold as it is or be compressed in cakes, bricks, etc.

The freshly picked tea leaves are steamed and piled to ferment inside a tank. Since the temperature rises with fermentation, it must be kept down continuously moving the leaves from one tank to another. After about 20 days the leaves are moved outside and dried in the sun. This method is the closest to the one used for pu-erh and the production of Hunan’s Fuzhuan fermented bricks, as well as Toyama’s batabatacha in Japan. One of the biggest difference lies in the fixing step: while pu-erh raw leaves are pan-fired to halt the oxidation, the Japanese post-fermented teas are usually steamed.

In this process, the fresh leaves are boiled rather than steamed. Once knead and stuffed inside a big barrel, they are covered up with the juice resulting from the boiling. This is carried out to prevent the air from affecting the anaerobic fermentation. After “sealing” the content with the juice from boiling, the barrel is covered with palm leaves and closed with a wooden lid. The tea leaves are then left to ferment for about 10 to 14 days, then finally taken out of the barrel and sun-dried. This technique is used in the making of Tokushima’s awabancha, Myanmar’s lahpet, Thailand’s miang, as well as bamboo stuffed post-fermented teas.

This process is a combination of the two first methods. The leaves, including the stalks, are steamed and piled up in a fermentation room at a monitored temperature and humidity. After about 5-6 days, the leaves, on whose surface fungi have begun to grow, are stuffed in a big barrel with the juice that was released during the steaming. A heavy stone is then placed on the top of the tea leaves to keep them compact. In about 2 weeks the bulk of closely-knit leaves is taken out, cut into smaller pieces, and left to dry in the sun. Goishicha from Kochi prefecture and ishizuchi kurocha from Ehime prefecture are produced using this method.

In the future articles we will look more deeply into each of the Japanese post-fermented teas. Stay tuned!

One thought on “Post-Fermented Japanese Tea”