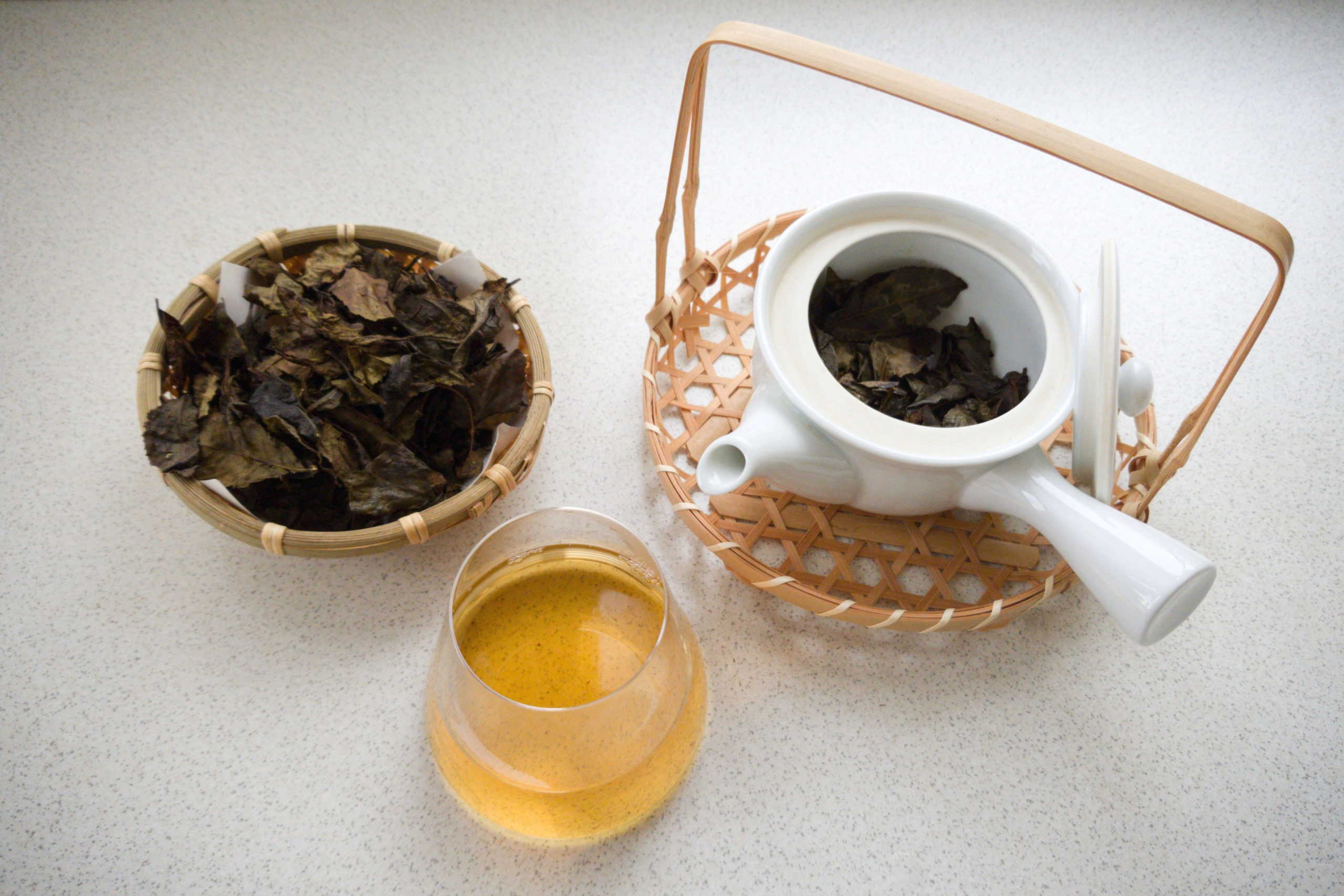 Awabancha is an artisan-produced post-fermented tea from Tokushima prefecture. According to the legend, its long tradition dates back to the ninth century. The production of awabancha is said to have been handed down by the Buddhist monk Kōbō Daishi, also known as Kūkai, who taught local people how to make tea from the trees growing wild in the mountains. Unfortunately, no historical accounts remain to verify this theory, and the first fragmentary written record, attesting the production in the area, dates back to the middle of the Edo period (1603-1868). However, it is only in the Meiji era (1868-1912) that the number of documents, recording information about the tea and its trade, increased. Relying on these sources, it appears clear that several families of tea farmers lived on income from awabancha production and that its consumption in the area was also considerably widespread.

Nowadays, this tea is mainly produced in the mountain villages around the towns of Naka and Kamikatsu, where, depending on the producing district, it is also known as “Aioi Bancha,” “Kamikatsu Bancha” and “Jidencha,” the last one being famous for its high quality. Although the word bancha is often written with the same characters as that of bancha green tea (番茶) the two productions should not be confused. To specifically identify the post-fermented tea, recently the character “ban” (晩), meaning “evening,” has started to be more common. While “ban” refers to the late harvest of the tea leaves, taking place in summer rather than spring, “Awa” is the old name of the region (today’s Tokushima).

To make awabancha, the leaves are anaerobically fermented by using the bacteria that ferments without oxygen. This process is also known as lactic acid fermentation. The raw leaves come mainly from trees of the wild Zairai varietal, also called “yamacha” or mountain tea. Yabukita cultivar is also quite widespread and often preferred for the larger size of the leaves, which are easier to pick by hand.

Normally tea leaves are left to grow on the tea bushes until they are large and tough. Tender sprouts and young leaves are actually not suitable for this kind of production, as they would break up and disintegrate during the fermentation process. More mature and tougher leaves are picked between late July and the middle of August.

After harvesting, the leaves are immediately treated to suppress the activity of enzymes and prevent oxidation. Rather than being steamed, the harder leaves are usually boiled for up to 20-30 minutes. The boiling time, as well as the method and tools used, depend on the personal choice and technique of each producer. Once the oxidative process is stopped and the leaves are softened, they are rubbed together by machine or by hand using a sort of big mortar called “fune.” This step allows to reduce moisture and to extract the components, when the tea is brewed.

The boiled leaves are then stuffed inside a big barrel by tightly compacting them with a pestle or by feet. Once the barrel is almost full, the leaves are covered either with straw, Japanese palm, or banana leaves, placing under them a lid and pressing the lid down with heavy stones and weights. Eventually, the content is completely sealed by pouring over the lid the cooled-down juice from tea boiling. It acts as an additional hermetic factor and prevents oxygen from affecting the fermentation. The use of various techniques, tools, and materials, such as the top covering made from palm leaves rather than straw, results in a different balance of bacteria, and therefore in the variation in the taste of tea from different producers.

After some time (from two weeks up to one month) the sealing liquor is drained, and the fermented leaves are removed from the barrels. Some producers set aside the top layer of leaves, called “kuchi cha,” which during fermentation remains in contact with the coverings and the sealing liquid. A drill or a machine is used for loosening the hardened leaves, which are eventually spread over straw mats to dry. The leaves are turned over from time to time to allow a homogeneous drying. Preferably, the drying phase takes place outdoor under the sun, but in case of bad weather conditions, the leaves can be left to dry inside a well-ventilated greenhouse. Lastly, after the stalks are removed and the dried leaves are sorted by size, the tea is ready to be bagged and sold.

The fermentation with lactic acid bacteria results in tea with a low amount of caffeine, catechins, and theanine, that are usually high in green tea, while enhancing the content of glutamic and aspartic acids. The result is a sweet and sour mellow taste, free from bitterness and astringency.

Different studies and researches have also highlighted several healthful properties of awabancha, such as its support in keeping low sugar levels in the blood, regulating bowel movements, and alleviating allergic disorders like seasonal rhinitis. Thanks to these properties and its unique taste, awabancha is gaining interest among an increasing number of consumers in a society that is more attracted to food quality and a healthy lifestyle.

The tea evaluated this time comes from Kamikatsu town, where the majority of the fields are located on a hilly terrain and are mainly comprised of Zairai varietal.

The big leaves are crunchy and well dried. Their smell is strong and has distinct notes of brine and pickles. The tea liquor is bright yellow, clear, and free from residues. The tea is characterized by a delicate fragrance, vaguely reminiscent of olives and pickled ume.

The taste is mellow and slightly savory with a good balance between umami sweetness and sourness. The sour feeling is not overwhelming at all and, on the contrary, is very pleasant on the palate. The liquor is totally free from bitterness and leaves a slightly oily feeling on the lips.

A great way to savor the mellow taste of Awabancha is to infuse 5g. of leaves in 300ml of boiling water. Good quality tea can give up to 5 brews. Just increase the steeping time progressively.