Between 10th-12th May Shizuoka held a tea festival called – World O-CHA(Tea) Festival. Tea festivals in Shizuoka are held every three years. The first festival has held in 2001. In 2019 is the 7th time to organize it.

This year the plan is to organize the festival twice: in spring and autumn. Spring festival was already held in May and autumn festival will be held between 7th-10th November. 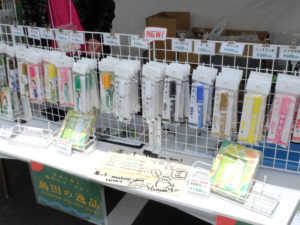 A number of tea producers from several tea producing areas in Shizuoka exhibited at the spring festival a few weeks ago. Shincha of this year was already available at many tea stalls. Many tea producers also competed to offer something novel and exciting to the festival attendees. You could find tea powder packaged as marker pens – chakki, or cigarette boxes – chabako. Some stalls were selling live tea plants. Some offered teas made from unique cultivars – Sun Rouge.

The festival was held next to a tea museum in Shizuoka prefecture, that brought to life tea culture of other countries too. You could try Taiwanese tea ceremony, Tibetan butter tea,  and Peruvian herbal infusion of the plant called cat’s claw.

The festival also offered live music (some songs were adapted for tea!) and delicious festival food with tea infusion.