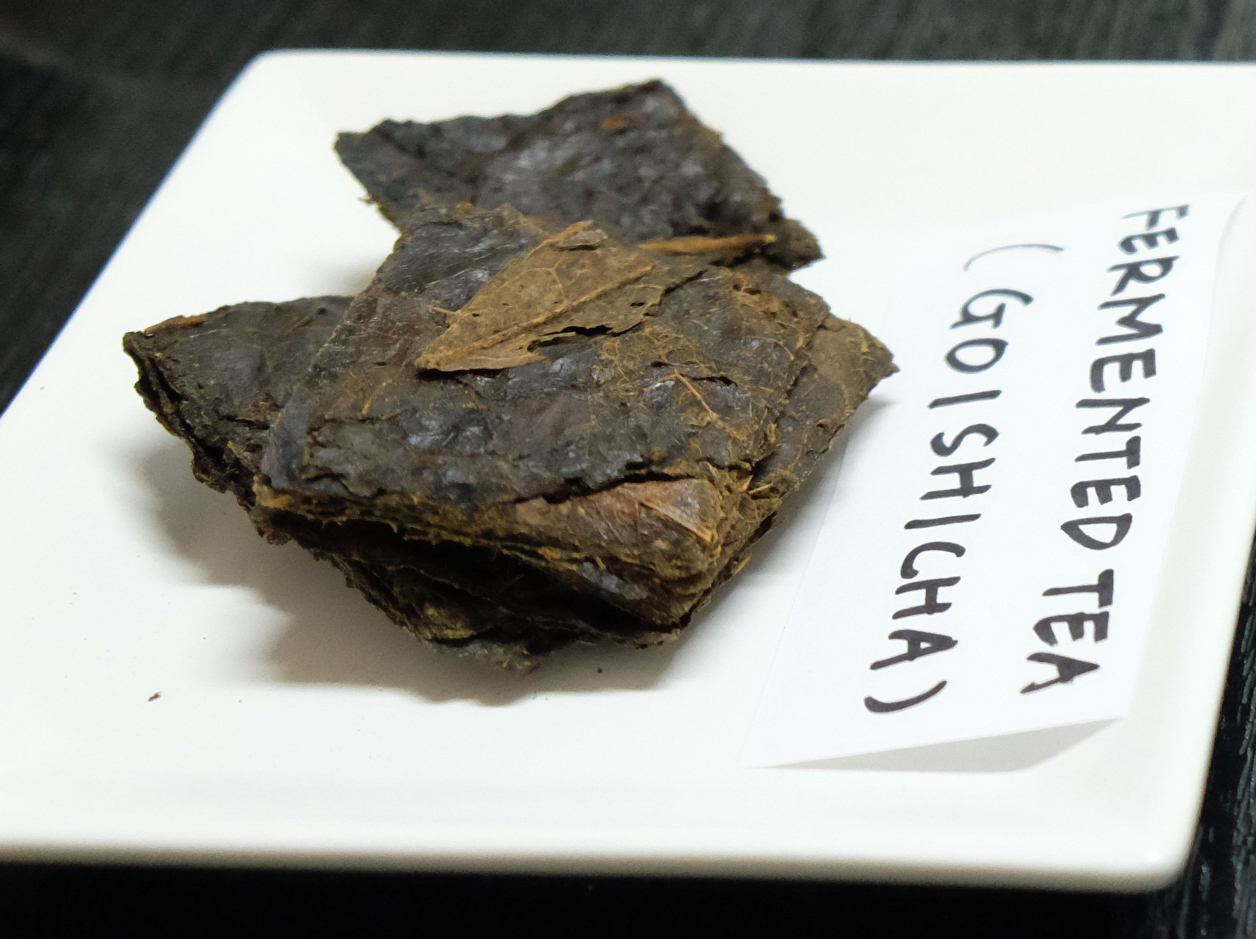 Goishicha’s production is almost exclusively limited to the area around Ootoyo town in Kōchi prefecture, where it is registered as a trademark of the Ootoyo Town Goishicha Cooperative.

The exact moment of its start in Japan is unknown but it is thought that goishicha first appeared in the 18th century. Although historically not attested, its similarity to the fermented teas produced by the ethnic minorities of south-west China, Laos, Myanmar, and Thailand (such as Myanmar’s lahpet or Thailand’s miang pickled teas), however, suggests that the knowledge of its making process may have arrived in Japan through cultural and commercial exchanges with China and Southeast Asia, thus dating back to ancient times. While drinking goishicha hasn’t been the habit of its producers, it seems that for many years this tea has been popular among sailors around the islands of Setouchi as a seasoning stock for okayu rice porridge.

Back in the Edo period (1603-1868), this tea was the main product of the Tosa fief (the city of Kochi today), also attested by Tosa’s historical records up to the Meiji era (1868-1912). The production of goishicha was at its height during the late 19th and early 20th centuries before the demand dropped, collapsing completely during the Shōwa era (1926-1989). The crisis was due to the change in eating habits and the depopulation of the rural area, coupled with aging farmer population. Only the Ogasawara family continued the tradition, eventually remaining one of the only few goishicha producers in the whole country. By 2002 only two makers survived.

Goishicha, like many fermented foods, has always been considered an excellent ally for the health of the digestive system. Recently, some farmers, aware of the tea’s beneficial properties and attracted by the consumers’ growing interest in healthy products, have committed to learning the production techniques from the Ogasawara tea artisans and have started taking back the tradition. Thanks to this renewed interest, there are now several producers based in Kōchi.

The name goishicha, literally means “go stones tea” and has derived from the tea’s resemblance to the black stones of the go game. When the tea leaves, that were pressed and cut in squares during the processing, are laid out on rice straws for drying in the sun, they look just like go stones lined up on the board. Originally, the corners of the tea were rounded after drying to make them resemble go stones more closely.

The raw tea leaves grow in the natural and wild environment in the middle of the Shikoku’s mountains under direct sunlight. The harvest occurs from the middle of June to July. In the past, the raw material typically came from tea bushes of the Zairai variety, growing wildly in the mountains, but nowadays leaves of the Yabukita variety are used most commonly. The same as for awabancha, the delicate buds, that sprout in spring, are left to grow thicker and harder before harvesting.

The manufacturing process follows the mixed fermentation procedure called Nidan hakkō (二段発酵) as explained in the previous article. Great skill and experience in managing temperature and humidity are required for the production of this tea, and there are many factors particularly difficult to control, such as the climate, that can affect the quality or prevent successful fermentation.

As suggested by the term “nidan hakkō,” meaning two-step fermentation, the leaves undergo two different types of fermentation. The first one, called kōki hakkō (好気発酵) and meaning “aerobic fermentation,” involves aerobic molds which need oxygen to grow. The second step favors the formation of anaerobic bacteria in the same way as in awabancha production, and is called nyūsan hakkō (乳酸発酵) or “lactic acid fermentation”.

Before the first fermentation takes place the freshly picked leaves are steamed, together with twigs and branches, for about 2-3 hours, making sure that they are cooked homogeneously. After this step, the leaves are spread over straw mats, and the big twigs are removed.

The first fermentation occurs inside a sort of cellar called “muro” where the leaves are piled over straw mats to form a heap, approximately 50-70 cm high. The pile is then covered with other straw mats and left to aerobically ferment for 7-10 days. For the second fermentation process, the leaves are moved inside big wooden barrels, pressed together, and flattened by heavy rocks put on top of the lid – an operation intended to remove the air between the leaves. The barrel is thus hermetically sealed and left to ferment in an oxygen-free condition between 14-20 days.

The compact pile of multi-layer flattened leaves is then removed from the barrels and cut into squares sizing about 2.5-4 cm. Finally, these fermented, layered, go-stone-shaped, tea leaves are tidily lined up over straw mats to dry in the sun.

Fortunately, the uniqueness of goishicha has been preserved from extinction thanks to the hard work of the farmers who strive to ensure that its ancient tradition will pass on to future generations.

The goishicha tasted here, was made from leaves grown at an altitude of about 450 meters, in the natural environment of the mountains around Ootoyo town. The tea fields there are surrounded by big cedars and other giant trees that grow tall and luxuriant by the forest.

The tea has been left to rest and settle for a couple of years. The result is a sweet and mellow liquor, free of astringency, but with pleasant and balanced acidity. The big dry tea leaves are tightly layered and have a deep, dark, reddish-brown color. Their scent is pungent and strong, reminiscent of brine, prunes, licorice, and Hijiki seaweed. The liquor is yellow-orange, clean, and bright. To the nose, it gives the hints of citrus peel, ume, and raisins with vague shades of kombu weed. The taste is sour and sweet, developing a slight minerality, and leaving a pleasant fresh feeling inside the mouth. The notes are citrusy and spicy, with flavors that recall lotus flowers, prunes, dry apple, accompanied by more balsamic hints of roots, and aniseed.

Goishicha can be either enjoyed as it is or used for cooking in the same way as awabancha. A square is about 5 grams and it covers the service for one to two people with multiple brewings in a 200 ml kyūsu (Japanese side-handle teapot). Nevertheless, it gives its best results when slowly boiled inside a 1-liter kettle for at least 15 minutes. This method takes time and patience, but the result is a delicious, deep taste and lingering umami feeling inside the mouth.