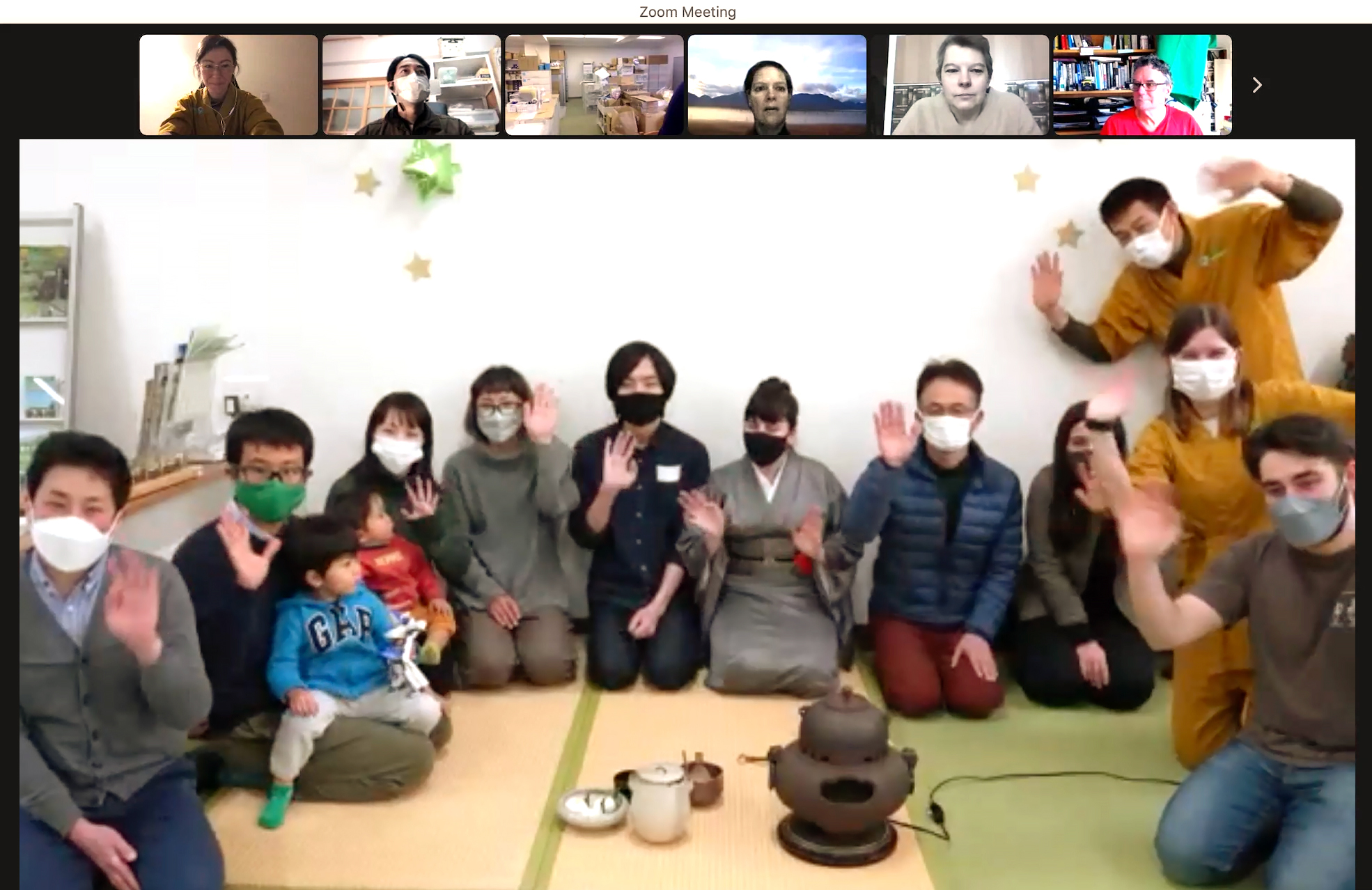 On the 29th of January we celebrated the 3-year anniversary of our association. The time has been passing very quickly and the road has been really winding. In these crazy times, though, we felt it was important to pause and thank our dear members for all the support and encouragement we have been receiving through the years.

Being truly global we have decided to hold the even both in person here in Japan, and online, for everyone scattered across the different counties. Even if in some time zones the event took place really early in the morning or really late at night, around 40 members joined together and included all the different backgrounds: tea farmers, tea sellers, tea teachers and of course tea lovers.

We started the event with the greetings form the members who gathered in person in Wazuka town, Kyoto to the members who joined online. What followed was a beautiful surprise from our member Alba, who is a practitioner of Omotesenke tea ceremony school. She performed a beautiful demonstration of the tea ceremony, after which those in Wazuka could enjoy a bowl of matcha and local sweets in a shape of a tea flower.

Refreshed and reenergized by Matcha we went on to look at the developments of the past three years, shared the future vision and presented the current projects. 2019, when the association was established, was full of energy and enthusiasm. We were able to hold two Japanese Tea Master Courses in Wazuka, welcoming 20 students. And just a few months later in October 2019 our team also went to Europe (Germany, France, UK, Spain, Belgium and Netherlands) to hold tea workshops and events. On this trip we also launched our Membership Program and held the first Foundation Courses in person. We were full on enthusiasm and hope for the coming year.

Then 2020 came and all plans got reversed by the pandemic. No Master Course. No trips abroad. But we did not get discouraged. We saw how many people loved Japanese tea around the world and we wanted to help tea producers in Japan. So we decided to move the activities online. March 2020 saw the start of our monthly Member Tea Gatherings, April 2020 was beginning of several public tea parties and July 2020 gave start to our Meet the Tea Farmer Events, where we have been inviting tea farmers various tea regions to introduce their tea farms and their teas. Then in October 2020, realizing we will not be able to invite students to Japan for a while, we also started holding the Foundation Courses online.

In 2021 a lot of these actives continued forward. Additionally in March 2021 we started holding the second education level – Intermediate Course online too. And of course, the biggest activity of 2021 was the Japanese Tea Marathon, where during the Tokyo Olympics over 15 days we introduced 15 tea regions of Japan. A lot of members joining the anniversary event, agreed that the Japanese Tea Marathon had the most lasting impression on them.

Talking about a more immediate future – 2022, we have started working on a few new projects as well. Realizing that visual content is really important, especially during the pandemic, when travel is restricted, we will be focusing more on the video content. We would like to introduce both the different kinds of teas as well as the different tea producing regions in Japan in the video format using youtube channel. And ultimately we would like to make a Japanese tea documentary. So the current projects will be a great way to build up the skills and gather the footage.

Another important area is to start growing a younger generation of tea lovers both in Japan and abroad, who would help to carry the tea traditions into the future. With that in mind we are working on a tea evangelist project, that focuses on Japanese university students, who would be going to study abroad. By teaching them about Japanese tea and providing a necessary tea kit, we hope they will be able to deepen their own interest and help spread the message about Japanese tea around the world.

The times are hard. But our minds are spinning – we will not stop. And we are hoping that after 3 years, the next time we celebrate will be 30!