Recently the Japanese Tea Export Promotion Council has released the latest data on Japanese tea export and it seems 2019 was a year of change.

Japan is among the 10th biggest tea producing countries in the world. However, commonly most of the tea produced here has been devoured by the domestic consumption. Export normally accounts for just a few percent and in the recent years has ranged between 1%-5%. In 2019 about 6%.

In last few years the export amount of Japanese tea has been growing steadily: 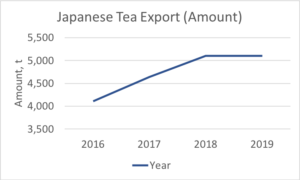 In 2019 the export amount grew again, but less steeply – just by 6t to 5,108t. Judging from this it appears that in the past year the growth of Japanese tea export has been slowing down. 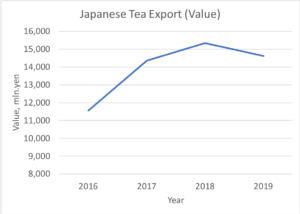 If we look at the value of the exported tea, the situation may be even more concerning. Between 2016 and 2018 the value of Japanese tea export grew consistently:

Last year nearly half (43%) of all exported Japanese tea was Matcha. But it seems the demand for it might be slowing down. On the other hand, recently several prefectures in Japan, including Shizuoka and Kagoshima, have been racing to ride on the Matcha trend and this has been increasing the supply of Matcha. With the growing supply it is only natural that the price would decrease. Looking these signs might we be nearing the end of the Matcha boom? What could be next for Japanese tea?

The future will tell.

2019 Japanese tea situation by the Ministry of Agriculture, Forestry and Fisheries