We would like to introduce you to a type of Japanese tea that is so rare that nowadays only 7 farmers produce it: Goishicha.

A fermented tea from the area of Otoyo, Kochi, on the beautiful island of Shikoku, Goishicha meets its origins all the way back to the Edo era at the beginning of 1600. Its method of production has been passing over from generation to generation until 1975, when the production declined sharply and only one single farmer was left to make this peculiar tea. He stubbornly kept the tradition alive and passed it down to his own son. Against all odds, in recent years the production increased again and a handful of farmers learnt again how to make this precious tea.

Every year in summer, those tea farmers gather to the single one that kept the knowledge and tradition to get the straw mats that will be used for the first fermentation of the tea and that contain the endemic microbes essential to this one tea (exactly a “microbial terroir”, according to fermentation experts David Chang and René Redzepi definition). 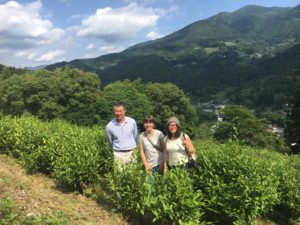 Leaves are harvested up to the length of one meter (!!), from Yabukita cultivar or Zairai. Despite not having organic certification, the cultivation methods follow strictly the rules of no pesticides, because the bacterias would not do well in their presence. Diversity and almost tropical vegetation of this area contributes to the tea’s character.

After plucking, the leaves are steamed and placed on the mats – covered – for a primary fermentation process. The following step is pressing the leaves in wooden barrels, covered air-tight and left for a few weeks. When the fermentation process is considered to be completed, the leaves are chopped into small squares (that resemble the oriental game of “Go” – hence this tea’s name) and left to dry at the sun for about 4 days.

The taste of Goishicha is mild and slightly salty / sour. Quite refreshing if drank cold.

It is also often used in cooking (as Japanese dish “ochazuke”).

Either way you drink it, this tea is said to be a healthy elixir.

It is supposed to be excellent for digestion and intestinal flora and also different medical studies have been made on this tea. Kochi University Research together with Tokyo Nogyo Dayuku found that Goishicha melts cholesterol and is quite beneficial in fighting off the flu. Other studies from Kochi University showed that this tea reduces the allergic inflammatory process that causes asthma. 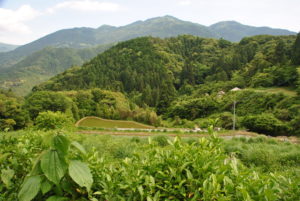 When we visited Goishicha town, we were quite impressed by everything that can evolve around a single tea that almost disappeared and is so little known!