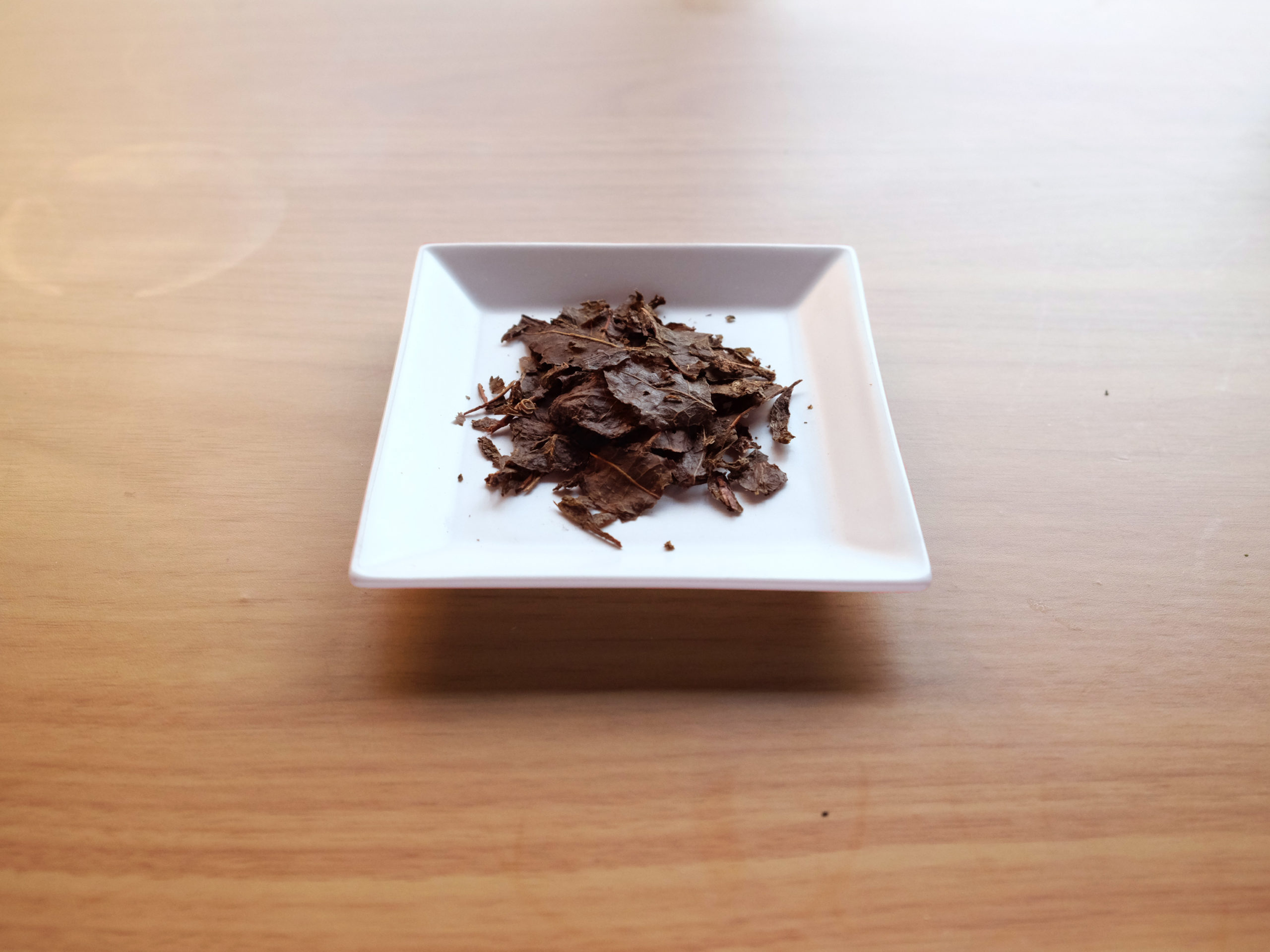 Originally introduced from China, Batabatacha is the Japanese post-fermented tea that bears the closest similarity to Chinese pu-erh. It is typical to the town of Asahi in Toyama Prefecture, and the city of Itoigawa in Niigata Prefecture. It was also produced in Fukui Prefecture until 1976.

Considering that in the Japanese language the onomatopoeic word batabata indicates a rattling or fluttering sound, many attribute the tea’s name to the rattling generated by the chasen whisk while quickly shaking it inside the bowl. Actually, rather than to the sound itself, the name refers to the fast movement of wiggling the chasen left and right to produce the characteristic froth.

Batabatacha fermentation takes place in one stage like awabancha, but the technique used is different. The leaves are steamed and not boiled to stop the enzymatic oxidation, and the piling method is unique to this tea.

The leaves come from plants of the Yabukita cultivar. While in the past both picking and processing were performed by hand, now the leaves are usually harvested by machine. Due to the different needs of the various tea farms, the harvest can take place either from late July to early August, or in September after the summer harvest for making Japanese second flush teas, or nibancha, is completed and the remaining leaves have grown. Normally both the leaves and the twigs are cut and collected, but the harder twigs and thick branches are removed before processing the leaves.

The leaves are steamed, rubbed, and piled over a cloth inside a big storage box called Muro, the bottom and walls of which have been covered in straw mats. When the fermentation starts, the temperature of the leaves gradually rises, especially in the innermost part of the pile. Therefore, when the pile reaches the temperature of 60-70 Celsius degrees (140-150 °F), the leaves are moved to a different box and cooled down to 35°C (95 °F) to allow an even fermentation and avoid damaging the leaves. The operation is repeated once every 2 or 3 days, always moving the leaves to a different muro, which has been prepared in advance. This technique requires skilled artisans and hard work, and in total is carried out between 10-15 times. The number of times is determined by evaluating the conditions of the leaves. When they become soft enough and the temperature stops rising, the fermentation is over, and the leaves are ready. The process can take up to a month.

Unlike the other teas, the leaves are left to dry for half a day in the shade and then transferred outdoor, under the sun, for an additional 2-3 days until they are completely dried.

In addition to its peculiar manufacturing, what makes this tea unique is its original method of preparation, which like matcha, requires the use of a chasen and the ability to create a dense and soft foam.