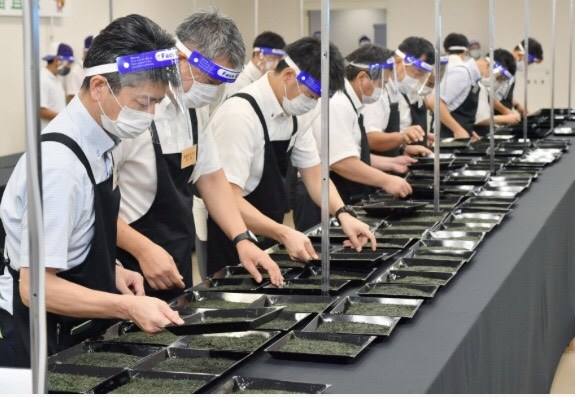 Every year tea producers from all over Japan compete in the National Tea Competition, the aim of which is to contribute to the development of the tea industry in Japan by bringing together all people involved in the tea industry and developing various projects to improve tea production techniques and increase consumption.

This year it was the 75th time to hold the competition. It was originally planned for 24th-27th August, but had to be postponed due to the state of emergency, and eventually was held between 16th-19th November in Shizuoka.

This year the competition received 830 submissions from 18 prefectures that were competing in 8 different categories: Regular Sencha 4kg, Regular Sencha 10kg, Fukamushicha, Kabusecha, Gyokuro, Tencha, Mushisei Tamaryokucha, Kamairicha. The Tencha category received the largest number of submissions – 112, and the Kabusecha category had the least – 91. The winners of each category were:

In addition to individual producers receiving awards, awards were also given to tea producing regions with the highest total score in each category. The list of the awarded regions are below:

We congratulate all the winners and wish them strength to continue the hard work of tea production.

*The list of all competition submission in Japanese can be found here.