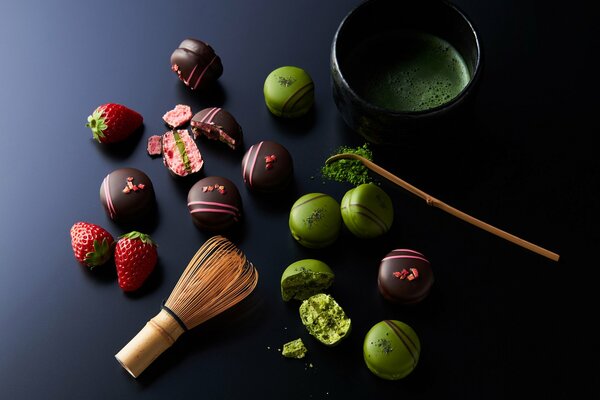 It is January. And here is 2022. Even if winter is typically a resting time for Japanese tea, both tea picking and tea rolling activities have already taken place this year. On the 5th January the first hand-picking of the year was held at Fukujuen greenhouse in their tea research and tourism facility in Kyoto. The activity has been held every year since 2000. On the 9th of January the Tradition Tea Rolling Preservation Society in Shimada city, Shizuoka also held the first of the year tea hand-rolling ceremony at the Oi Shrine to pray for the prosperity of the tea industry.

As the pandemic continues, however, tea buyers in Shizuoka are cautious about replenishing their tea stock this year. On the other hand, the pandemic seems to have little impact on the export of Japanese tea. According to the recently released data, Japanese tea export last year was at a record high both in terms of volume and revenue. Compared to 2020, the tea export volume in 2021 grew by 17.1% and reached 6,178t. During the same period the tea export revenue grew even more – by 26.1% and reached 20.4bn yen. Powdered green teas took the lead and accounted for 65.3% of the export. The largest importers of Japanese tea in 2021 were the USA, Germany and Taiwan. To promote the export event more both the national and prefectural governments will putting more effort in promoting the production of organic teas.

Domestically, recognizing the declining interest in tea, there have been a few initiatives to engage both women and the younger generation more deeply in the tea industry. In Shizuoka ‘Tea W’ – a new project has been created to connect women in the tea industry, share ideas and create new consumption value. In Kyoto, aiming to discuss the future possibilities of tea, the Society of Japanese Culture at Kyoto Prefectural University held a lecture titled “Japanese Tea for Future Generations”.

Looking domestically there is also more attention on health and wellbeing. In January a study group was held in Shizuoka to develop more products focused on tea and mindfulness. Itoen – one of the latest tea companies in Japan, has also announced that this year they will be releasing between 5-10 new tea products focused on the health function. Three tea priducers from Fujieda city in Shizuoka have jointly developed a new mint chocolate, that is enriched with catechins, called ‘ Tatakau Choko Hiro’ (たたかうチョコヒーロー). The general sales are scheduled to start in March. Recognizing that Gyokuro is rich in caffeine and can provide the energizing function, together with the Japanese tea ceremony school students from Osaka University have created a paper cup preloaded with Gyokuro leaves, that are placed at the bottom and separated with a filter.

Among some more interesting developments is the research taking place at Kyoto University, where graduate students are researching various plants including Camellia Sinensis, after they are consumed and excreted by various insects. Even when excreted by insects most plants seem to retain their functional components, and even gain some pleasant aroma. So this may be a new possibility in the production of tea and herbal infusions.

Back to more regular tea products, Asahi has announced that in April they will be releasing a new wakoucha bottled tea, using 100% domestically produced tea leaves from Kagoshima prefecture. And as we are approaching February many tea companies, including Fukujuen and Ito Kyuemon have started to release matcha chocolates for Valentine’s day.

We hope your Valentine’s day will also be filled with sweets and tea!