Located on Kyushu island, Kumamoto is known as the land of fire. It is home to Mount Aso - the biggest active volcano in Japan and holds several fire festival including the Aso Fire Festival in the middle of March.

Kumamoto is a large agricultural producer. The production of tomatoes and watermelons is the highest in Japan. Unique tidals flats are also great for shellfish and shrimp harvesting.

It is believed that Kumamoto has a long history of tea production too. Some written documents show that tea was already produced here around 12th century, likely from native mountain tea trees - ‘yamacha’ (ヤマチャ).

In 1632 the feudal lord of the Hosokawa clan started the Gozen tea garden in the present day Yabe town. Around this time the pan-frying method was introduced in Kumamoto too, and was mainly practiced by korean carpenters, who wanted to remain in Japan after the building completion of the Kumamoto castle.

Kumamoto also gave the start to the black tea production in Japan with the first black tea training centre opened here in 1875. However, it seems the plan to export black tea did not succeed and green tea production soon took over.

With 1120t of tea in 2020, currently Kumamoto ranks No.9 in tea production in Japan. Most of the tea is made in small towns in mountainous areas. Hitoyoshi・Kuma city is the largest tea producing area in Kumamoto. Tea is also produced in Kikuchi, Yamaka and Ashikita・Minamata.

Two most common kinds of tea in Kumamoto are sencha (50%) and steamed tamaryokucha (38%). In addition to that, Kumamoto makes some kabusecha and kamairicha too. In recent years there is also rising interest in organic production, GABA teas and low caffeine teas. 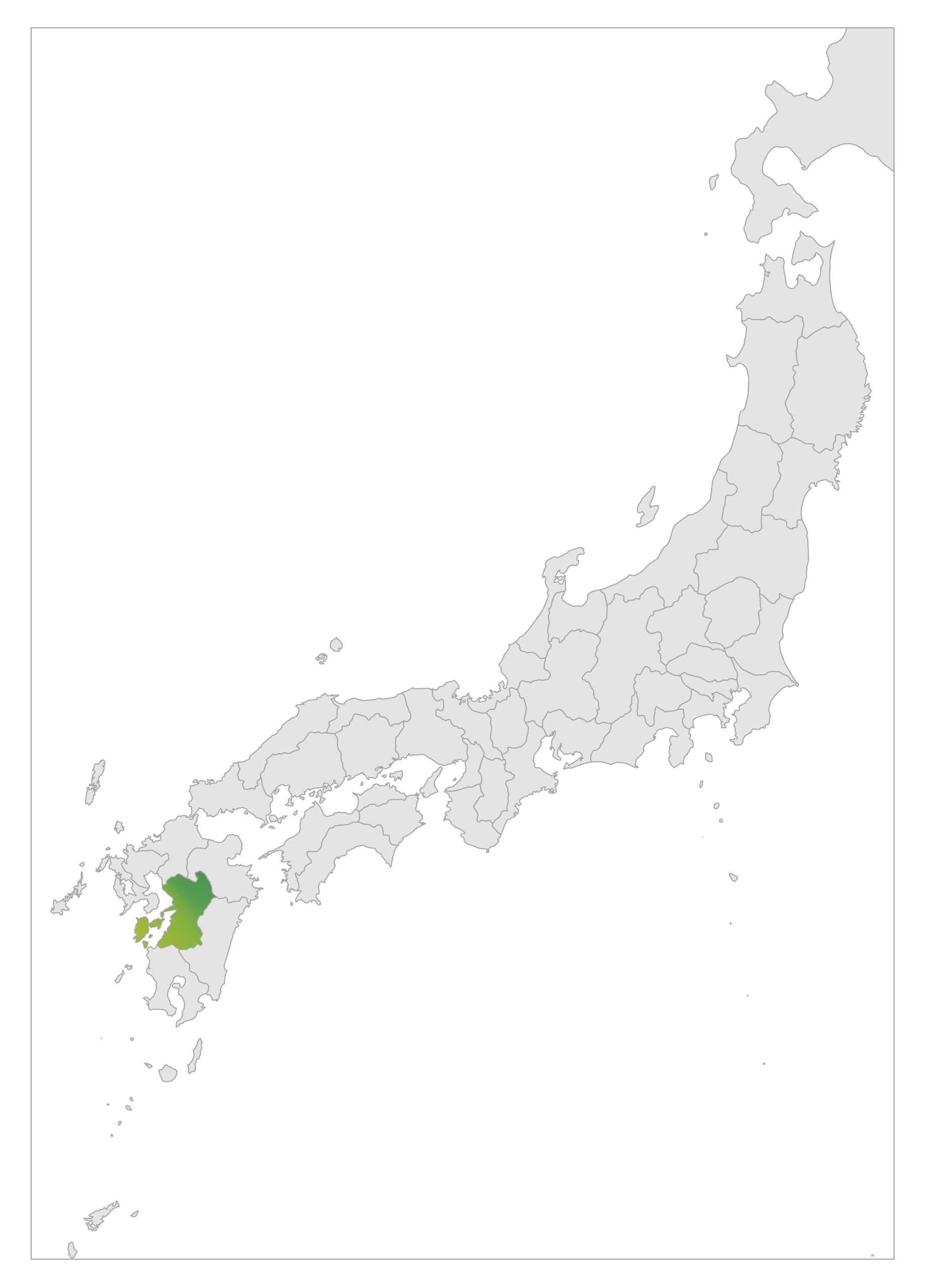 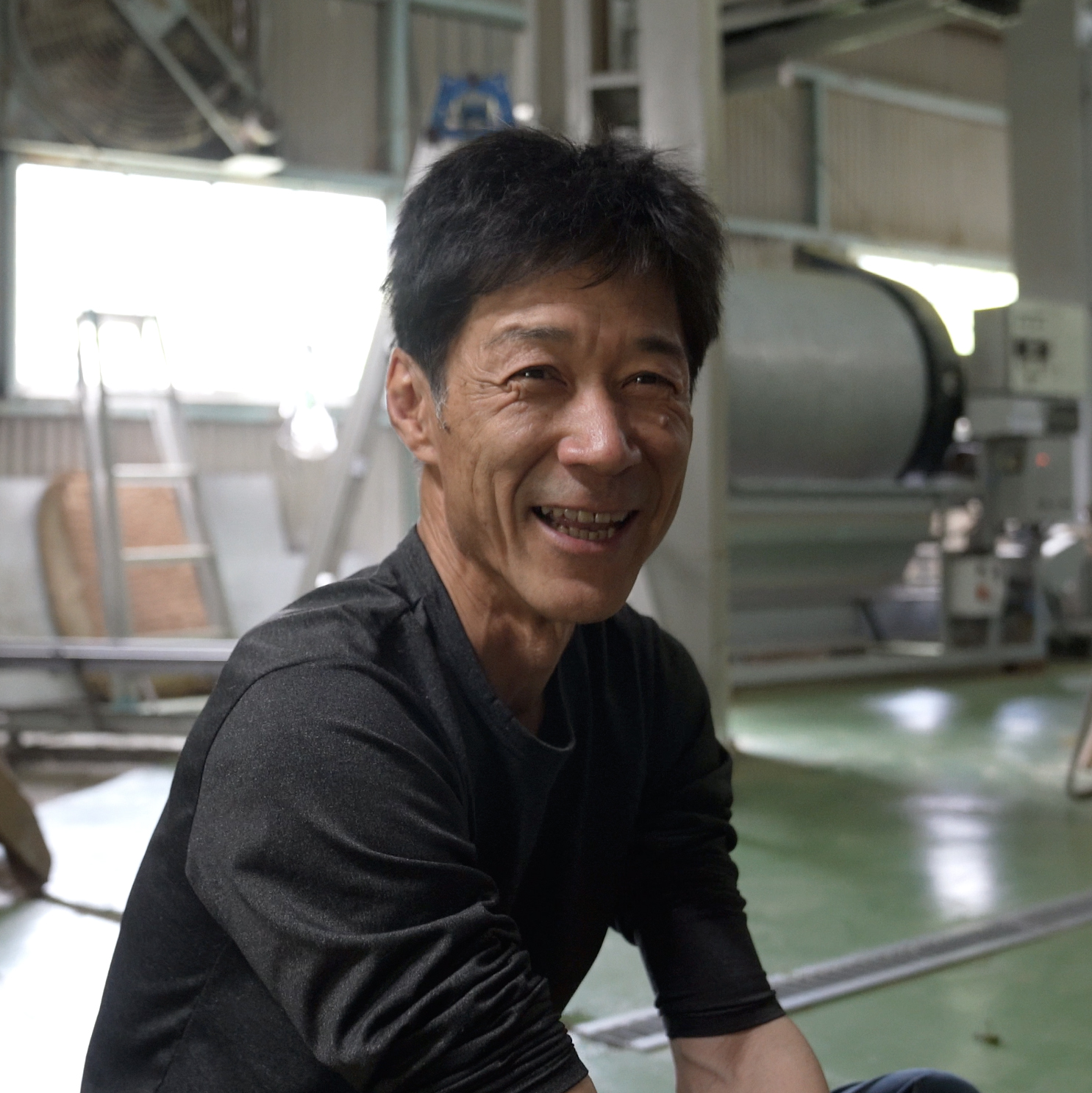 Toshihiro Kajihara is the third generation tea farmer and the president of Kajihara Tea Garden - a small tea farm located in the Ashikita region of Kumamoto prefecture.

The Kajihara family started tea farming in the 1950s and currently manages about 2ha of tea fields. The area was traditionally known for pan-fried tea - kamairicha. While many tea farmers have switched to steamed tea production, Kajihara Tea Garden has decided to continue the tradition of making kamairicha. Kajihara-san has even gone to China and Taiwan for further training in pan-fried tea production.

Tea produced by Kajihara Tea Garden is organic, made without pesticides. They produce several different teas including kamairicha, oolongcha and wakocha. They also make some tea from yamacha - the wild tea trees.

Kajihara has never sold tea in the tea market - it is mostly sold directly and locally in town.

More information about it on their website (in Japanese). 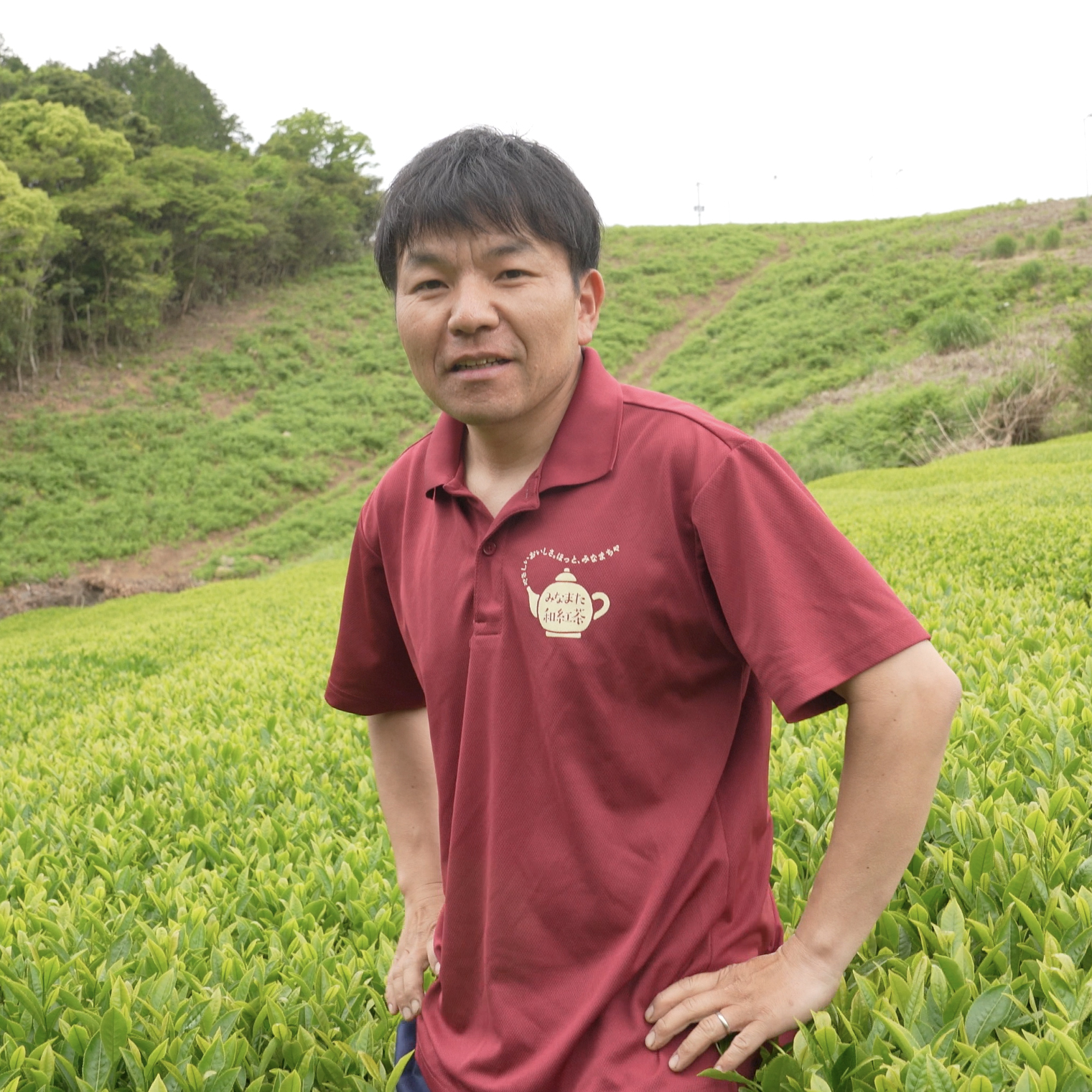 Kazunori Sakaguchi is the third generation tea farmer and the president of Sakaguchien, a small tea farm located in the Minamata area of Kumamoto prefecture. It is interesting to note that the area still uses tea bushes as a hedge barrier around the houses.

Sakaguchi family has been farming tea since 1929 and currently manages about 3ha of tea fields. The tea was mostly produced in a conventional way, but in the last few years they are reducing pesticides and are trying to switch to the organic method.

The pride of Sakaguchien is Japanese black tea - wakocha. Sakaguchi-san started making it about 10 years ago and in 2020 it wo nJapanese Black Tea Grand Prix in 2020.

More information about Sakaguchien on their website (in Japanese). 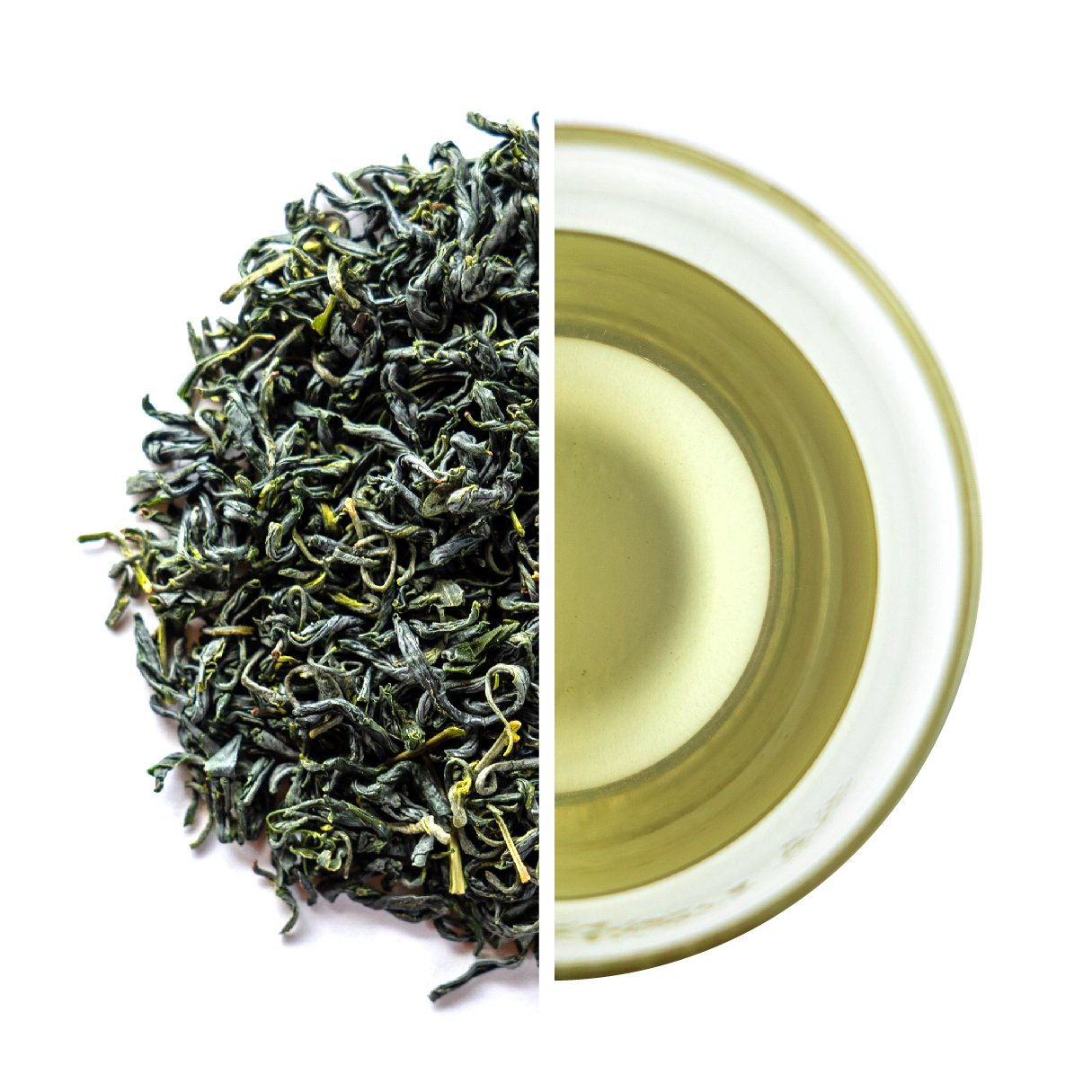 Kamairicha - pan fried tea is traditional in the region. It is recognized for a bit curly and bent shape.

This tea is a special blend created by Kajihara-san, with Zairai as its base. It is grown unshaded and harvested in spring.

When brewing it, Kajihara-san recommends using 5g of tea with 150ml of water, cooled down to 80°C. Once the water is in the teapot, let it steep for about 1min. The brew has a nice yellow tone and some gentle sweetness. 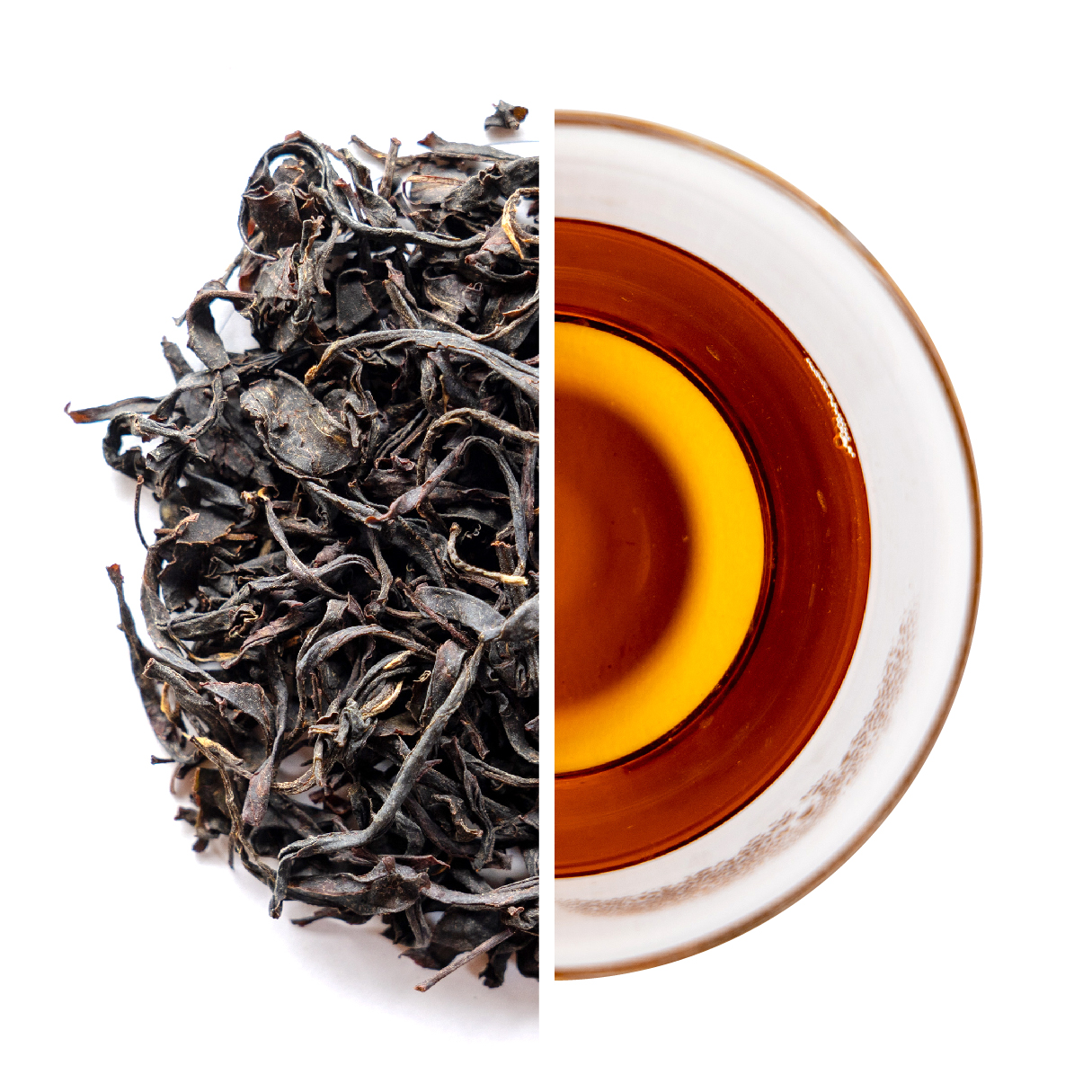 Wakocha - Japanese black tea is a bit rare. This wakocha is harvested in spring and made from Benifuuki cultivar. It is withered, rolled and oxidized until the color of the tea leaves darkens. Then it is dried to finish.

Sakaguchi-san recommends brewing 5g of tea with 300ml of boiling water (100°C) for about 3 min. The brew results in a mesmerizing dark amber color. It has a lot of natural sweetness and lingering fruity notes of persimmon and grape.