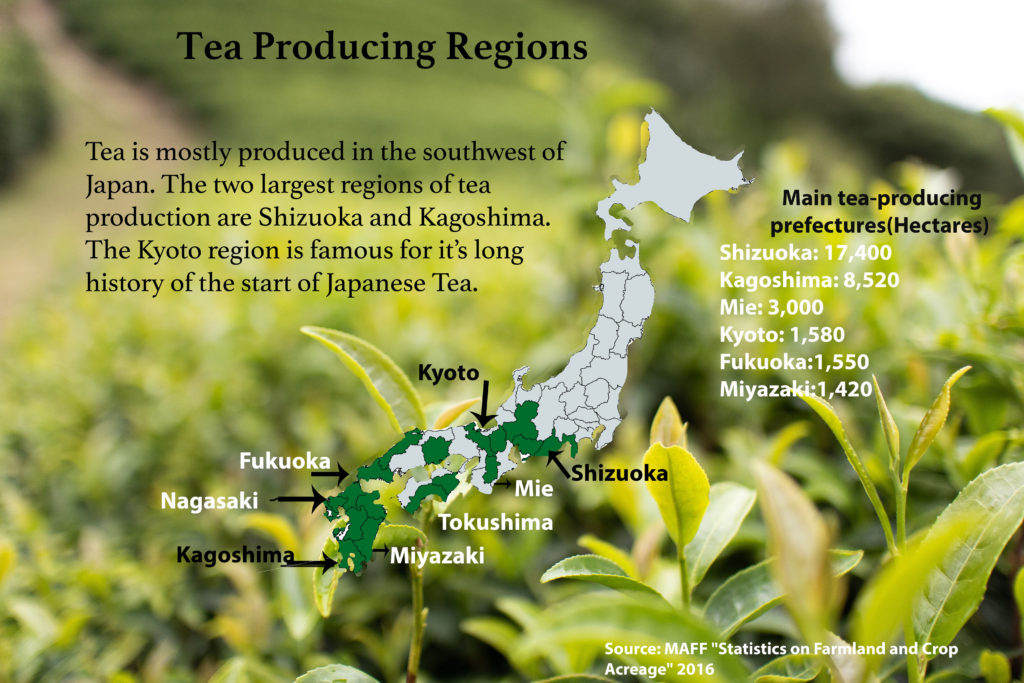 Japan is the 8th largest tea producing country and is known to grow tea in the southwest of Japan.

The two largest regions of tea production are Shizuoka and Kagoshima. The Kyoto region is famous for its long history of the start of Japanese tea. Yet, there are many unique green teas in the regions of Japan.

Please find your favorite area to explore below!

Shizuoka is the largest tea producing region in Japan. It’s tea plantations produces sencha for large commercial uses, and Fukamushi Sencha, which is deep steamed sencha that requires a longer time in the steaming process rather than normal for processing Japanese green tea.

There are many tea plantations in Shizuoka Prefecture, that offer varieties of tea that are not only for drinking, but that can also be eaten. One of the most famous of which is, Kawane. Located on the mountainside on the upper stream of Oi river, Kawane is famous for producing refined, deep-steamed Fukamushi Sencha.

Kagoshima is surrounded by volcanic and ocean surroundings. Kagoshima has been covered in a layer of volcanic ash known as “shirasu” (in Japanese). Kagoshima is known for mainly producing different types of Green tea, known for their sencha.

Chiran Tea is Kagoshima’s famous teas lies in its lime green colored leaves and refreshing fragrance. Chiran（知覧）, blessed with favorable conditions such as the rich fertile soil from the volcanic ash of Mount Sakurajima, mild climate, and ample sunshine, is one of the leading tea producing regions in Japan. There has been a recent increase in cafes around Kagoshima city center serving Japanese Green Tea（日本茶）.

Mie
Japan’s largest producer of Kabuse sencha(tea that is shaded for two weeks) and Mie is known for Ise Tea, the origin of Kabusecha (かぶせ茶) is here, in the district of Suizawa in the prefecture of Mie, between Suzuka range and Ise Bay. This favorable environment and fertile soil make excellent teas. The prefecture of Mie is ranked 3rd in terms of the annual production of green tea in Japan, after the prefectures of Shizuoka (静岡) and Kagoshima (鹿児島). However, a third of Kabusecha is produced here, making Mie the first production area of Kabusecha in Japan.

Kyoto was the first place where tea was introduced from China over 800 years ago, and the quality of tea is still regarded as being the highest in the country. Its long history is started on how tea seeds were first planted in the Uji, Kyoto region in Japan.

Uji was one of the first places in Japan where green tea was cultivated. It is believed that Eisai, the monk famous for bringing Rinzai Zen Buddhism to Japan from China, also told priests in Uji to plant and cultivate tea in the area. It known for being the largest producing of matcha, green tea powder.

Yame is a well-known region in the Fukuoka prefecture, as the tea plantations are located in the basins of the Yabe and Hoshino Rivers. Fukuoka is the main production region for gyokuro tea in Japan, accounting for half the volume nationwide. Both the Yamesencha and the gyokuro are known for a rich flavor with little bitterness or astringency. The tea is harvested from the end of April to the beginning of May.

Kirishima tea is Miyazaki’s high-quality green teas mostly Sencha and Gyokuro. The Sencha, produced mainly in the mountains of Makizono is classified among the best in Japan. The production of Gyokuro, which has a unique character all its own, characterized by its very attractive flavor, providing a welcome respite to the famous Gyokuro from Yame and Uji.